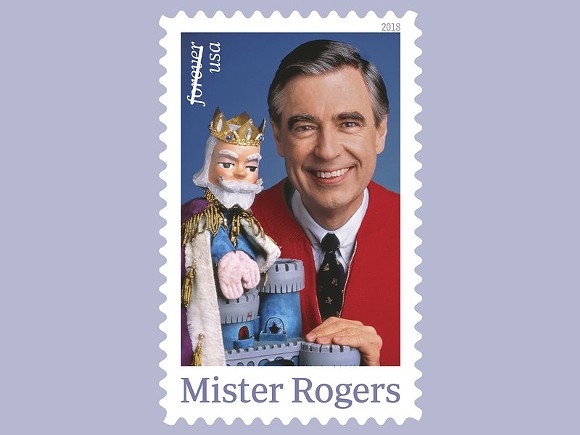 Rollins graduate and television icon Fred Rogers finally got his own stamp from the United States Postal Service.

The stamp, which features Rogers and King Friday, was revealed at a ceremony in WQED's Fred Rogers Studio in Pittsburgh this afternoon, roughly 50 years after the airing of his popular children's show Mr. Roger's Neighborhood.

"Mister Rogers made the ups and downs of life easier to understand for the youngest members of our society," said Postmaster General Megan Brennan at today's unveiling. "He shaped generations with his kindness and compassion."

Rogers earned a degree in music composition from Rollins College in 1951.  His life motto, "Life Is for Service," is engraved in marble on a wall near Strong Hall. The beloved television star and his wife also owned a home in Winter Park.

Rogers died of cancer in 2003 at the age of 74.
Stay on top of Orlando news and views. Sign up for our weekly Headlines newsletter.