Those preceding him as well as those following kept crying out:“Hosanna! Blessed is he who comes in the name of the Lord! Blessed is the kingdom of our father David that is to come! Hosanna in the highest!” Mark 11: 9-10 #PalmSunday

In between his Biblical messages, Rubio also sent out an official response to those participating in the March for Our Lives rallies, stating that "many American's do not support a gun ban," which is very false.


"While I do not agree with all of the solutions they propose, I respect their views and recognize that many Americans support certain gun bans. However, many other Americans do not support a gun ban. They too want to prevent mass shootings, but view banning guns as an infringement on the Second Amendment rights of law abiding citizens that ultimately will not prevent these tragedies," he said.

Okay. Can someone please show Rubio this recent poll from Fox News viewers? 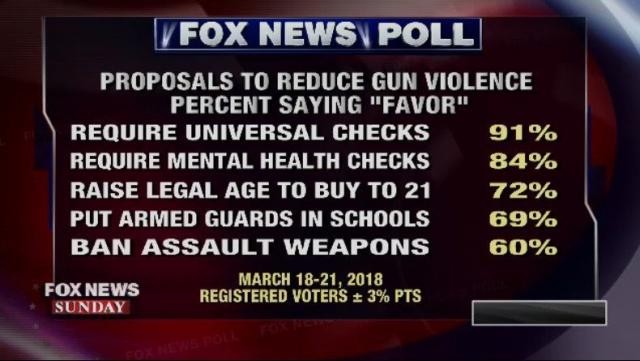 Florida voters overwhelming support stricter gun laws, says two new polls
By Colin Wolf
Blogs
If you'd like, you can print off the image above and send it to his Washington office at  284 Russell Senate Office Building Washington, DC 20510.