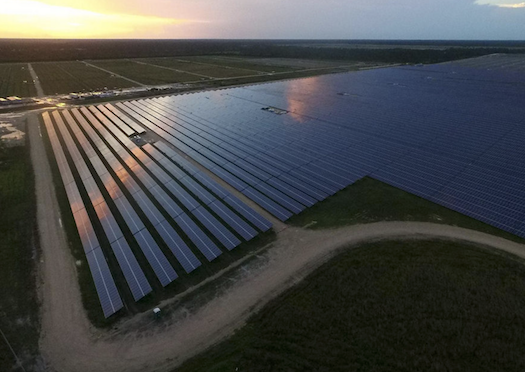 One brand-new Florida town has taken its first steps toward becoming completely solar powered. Babcock Ranch, just north of Fort Myers, already has residents moving in and businesses looking to get in on the action.

The town's developers hope its success will keep the federal government from imposing high tariffs on solar energy, and keep the energy source in private hands rather than government-controlled. Babcock Ranch developer Syd Kitson says Florida has done a good job of embracing solar energy.

He says Babcock Ranch should see about 250 families moving into the area within the year. President Donald Trump imposed tariffs on solar panels made outside of the U.S. earlier this year, although opponents say that could cost thousands of jobs and billions of investment dollars for the solar industry.

Kitson says the land for the ranch was purchased in 2006, and more than 90 percent of it is being preserved for wildlife. For the homes and businesses, Florida Power and Light partnered with town founders to build a 75 megawatt solar-generating facility that's already working.

Kitson says energy prices are comparable to other power sources, and the home prices were set to attract a wide range of buyers.

"We have homes priced from anywhere from, you know, the high ones, low $200,000s, up to $1 million. What we're trying to do is create a full stratification of pricing and products for people to move into Babcock Ranch."

He adds that autonomous transportation shuttles are already in the works, along with a gigabyte of fiber in every home.