Over the weekend, Sinclair Broadcast Group garnered criticism for requiring its anchors to read a statement that took a shot at major national media outlets. Many in media and beyond wondered why the company’s employees simply didn’t quit, calling them "whores" who "should be ashamed of themselves" for going along with the directive. 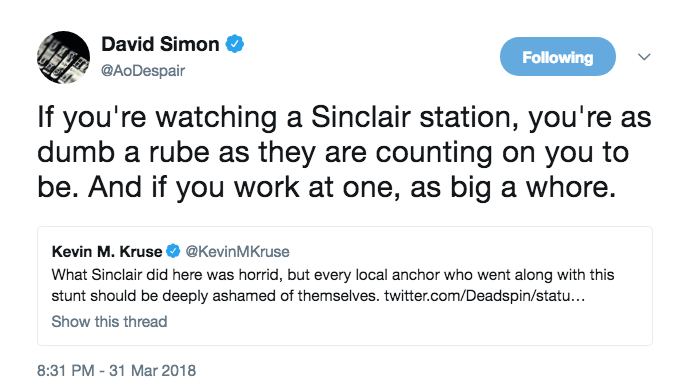 If only it were that easy. According to a Bloomberg report, which reviewed two employment contracts, “some Sinclair employees were subjected to a liquidated damages clause for leaving before the term of their agreement was up[.]” That means if an employee quits, they’re required to pay as much as 40 percent of their annual salary back to the company. That’s a sizable amount for individuals who more than likely have everyday bills to pay, like a mortgage, student debt or a car payment.

These types of damages clauses aren’t common in most employment contracts, Bloomberg reports. However, they are relatively common in the broadcast industry, particularly when it comes to on-air talent.

Jonathan Beaton, a former employee of Sinclair, says he can attest to the fact that the company doesn’t shy away from enforcing the clause.

“So after a year [at WPEC] I’d had enough and asked to be released from my contract, which is not uncommon in TV news markets,” Beaton, who previously worked at Sinclair station WPEC News 12 in West Palm Beach, tells Orlando Weekly.

Beaton says that the company told him he had to pay around $25,000 to get out of the contract, even though he was only making roughly $44,000 a year.

“So that was clearly something I couldn’t do,” he says.

In 2015, after leaving the TV news station, Beaton moved back to Orlando and opened up his own public relations firm. But just before the statute of limitations had run out, on Oct. 13, the company sued Beaton in Orange County courts, requesting $5,700 in damages and other related costs, according to a copy of the complaint filed in state court.

Beaton, who was a reporter, also says the company guided its newsrooms' work toward a conservative point of view while he was working with WPEC. He compares the slant to ultra-conservative publications like the Blaze and the Daily Wire.

“It was more than just the questions,” he says. “It was the stories that we were told to do; they had to have a religious tie-in. We couldn't do stories, for the most part, that involved the LGBTQ community. Basically, there were a set of parameters and we had to stick to them.”

Sinclair currently operates 193 TV stations in more than 80 markets across the nation. Those stations are estimated to reach about 38 percent of American households, and the broadcast company is seeking approval from the Trump administration to buy Tribune Media Company, which would amplify the company’s scripted messages even further.

“I would go so far as to say that if it weren’t for Sinclair Broadcasting, Donald Trump would not be in the Oval Office right now,” Beaton says. “When you realize the sort of propaganda they’re pumping out there, you realize how scary this is.”