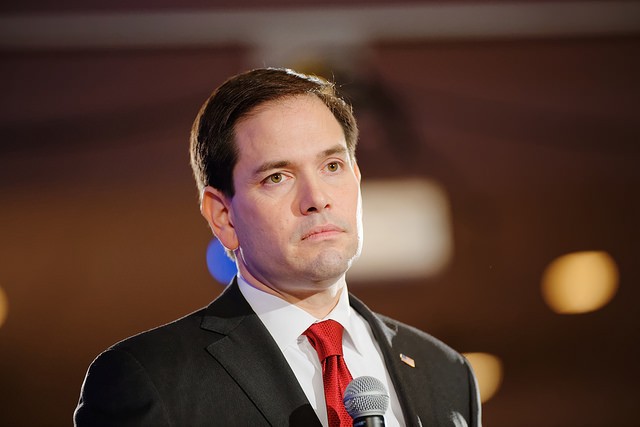 Following the Parkland massacre on Feb. 14, remember the CNN Town Hall on gun control featuring Rubio at which he was essentially tarred and feathered by angry students and parents in his home state? Remember how he told them – in front a national audience, no less – that 18-year-olds shouldn’t be allowed to buy a rifle? Remember how he said, “I will support a law that takes that right away”?

That was all just talk, come to find out. But who’s actually surprised by the fact that Rubio’s a crowd-pleasing dweeb? Even more so, who’s surprised that Rubio is actively pushing legislation in D.C. that would legally allow 18- to 20-year-olds to buy rifles, all while attempting to strike down D.C.’s prohibition of assault weapons?

Simply put, that’s the case, reports the Associated Press. In the nation’s living room, where some of the country’s strictest gun laws are on the books, Rubio has twice sponsored a bill that’s more or less the antithesis of what he said he would support during the CNN Town Hall.

It’s dubbed the Second Amendment Enforcement Act, and Rubio introduced it both in 2015 and again in 2017. That comes as no surprise from an A-plus student like Rubio, at least according to the NRA’s assessment. On the organization’s website, among Rubio’s other gun-happy accomplishments, it says that he “sponsored legislation that would repeal Washington D.C.’s draconian gun control laws and restore the right of self-defense to law-abiding individuals in our nation’s capital.”

Following that same Town Hall, Washington Mayor Muriel Bowser challenged Rubio to withdraw his bill. As a result, Rubio then sent Bowser a letter saying that they “share a common goal” and that the intentions of his bill are to bring Washington “in line with federal law.” If federal law were to change – an admitted goal of Rubio’s – then D.C.’s laws could change as well.

Holding his feet to the fire, Bowser, a Democrat, then posted the letter to her Twitter account, with handwritten notes and objections included in the margins, including a little note that calls Rubio’s stance “the epitome of hypocrisy”:

A few things — 8, to be exact. ⬇️ #EnoughIsEnough #NoMarcoNo pic.twitter.com/Lg0dfErOkC


“He’s just using it to boost his NRA score,” Bowser told the Associated Press. “What we think Marco Rubio should be focused on is his job.”

She’s right. But tell us something we don’t know.

Rubio has received more than $3.3 million from the gun lobby over the course of his career. That makes him the sixth-highest NRA recipient in Congress.

That makes him, in Bowser’s words, a hypocrite.