Local vocal celebrity Mayor Buddy Dyer is moving on up from his simple days voicing the welcome message on the Orlando airport's automated people movers to an actual cartoon character gig.

Dyer is the voice of Wizard, a boot-wearing, blue dart frog who sounds like he’s more comfortable wrangling cows at the Kissimmee cattle drive than living in the rainforest. You can watch a clip of the mayor flexing his vocal talent here.

Wizard is a character featured on "Planet Blue," an animated children’s television series being launched this summer that focuses on promoting environmental sustainability. The show comes from Arrow Sky Media, a Nashville digital technology firm that relocated its headquarters to Orlando’s Creative Village last year. 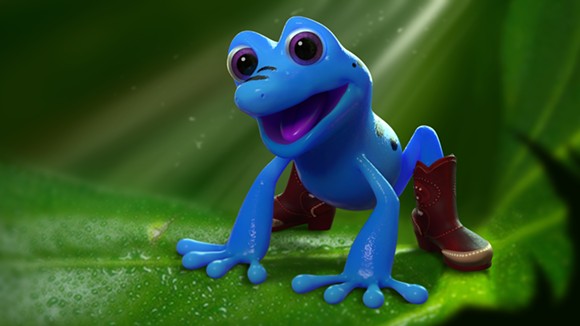 "Orlando has proven to be more than just a place for our relocation and growth within Creative Village," said Arrow Sky Media managing director Victoria Lauren in a statement. "The City Beautiful and Arrow Sky Media share the vision of the future for 100 percent sustainability, compassionate outreach and inspiring our youth to make a difference in the world."

The company is expected to bring 114 high-wage jobs to the city and invest $2.9 million capital in the region over three years, according to the Orlando Economic Partnership.

"Being a part of the Planet Blue series as the voice of Wizard the Blue Dart Frog was a thrill, and the series’ aim to educate students about sustainability and the environment is extremely important for our future generations," Dyer said in a statement. "We are excited to welcome Arrow Sky Media to Orlando as one of the first companies to open in Creative Village, not only supporting the growth of high tech, digital and creative media companies in Orlando, but also encouraging sustainable and responsible business practices."

You can catch "Planet Blue" on most streaming services like iTunes and Amazon later this year.