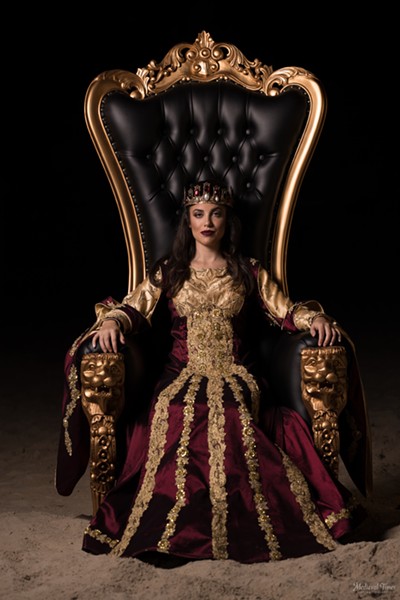 For more than three decades, the Medieval Times dinner show has always focused on the king, but times are changing, and now a new queen-focused show is set to debut.

The new show is a continuation of the current one with the queen being the daughter of the former king. Medieval Times stated that the female storyline is due to guest demand for a more accurate representation of the fantasy genre.

“Our new female queen is a sign of the times and we couldn’t be more excited to bring her to Florida,” said Doug Dorn, Medieval Times Orlando, FL General Manager. “The queen is fully in charge. Her authority is sometimes challenged, but she quickly asserts herself as a strong leader.”

The new show has already rolled out at four castles (Dallas, Chicago, New Jersey, and Buena Park, CA) with all nine locations featuring the updated storyline by the end of this year.

The new show will also feature updated costumes. More than 700 new custom costumes have been hand-made in Dallas for the shows. Another two hundred new custom suits of armor, shields, and helmets were hand-made at an armory here in Florida.

The cast has been training for the new show for over three months with particular attention to the queens, who have become “experts at riding the impressive Andalusian stallion for the new show,” according to a Medieval Times spokesperson.

Dr. Daniel May, known for work on numerous IMAX films such as Everest and Journey Into Amazing Caves, directed a brand new soundtrack for the show in Kiev, with the National Symphony Orchestra of Ukraine. International Laureate Award recipient and famed poet Solomia Gorokhivska helped write the lyrics for the score and in it.

The Kissimmee castle is the first custom-built Medieval Times castle, and after 32 years it was time for some significant upgrades. A brand new $1 million, LED lighting system has been installed. More than 120 hours of programming have gone into the new lighting system, which features 500 new lighting cues. The former system featured 14 colors; the new one has 256 available. Altogether the new system has more than 10 miles of cables; all tucked out of sight.

Not to worry though, even with all the new updates the popular aspects of the former show are still there. The falcon will remain in the new show and, of course, all the jousting is still there, as well.

The new show will make its Florida debut on April 19. Tickets are on sale now.