Charlie Kirk, who 'owns the libs' with adult diapers, will speak at UCF today

Kirk will be speaking at UCF's Psychology building at 7 p.m.

The UCF chapter of Turning Point USA will host Kirk's 45 minute speech, followed by a 45 minute Q&A, which they say will "expose progressive lies and propaganda," according to the event's Facebook page.

Naturally, Kirk's appearance has not gone unnoticed at UCF. The Orlando Workers League is planning a protest outside of the event. "We call on all lovers of liberty and equality to show their solidarity and counter-protest Charlie Kirk’s speech at UCF on 4/10/18," said OWL on the Facebook event page. "Call UCF and demand that Charlie Kirk’s speech be revoked. His presence on our campus endangers the lives of UCF students."

The dangers that OWL is referring to are the attacks on protestors at Colorado State University back in February, when supporters of Charlie Kirk chanted Neo-Nazi slogans, showed up in riot gear, armed with "heavy flashlights" and confronted protestors.

But besides violent protests, Turning Point USA has had its share of other substantial controversies. The group is a registered 501(c)3 non-profit organization that speaks about "conservative values" at places like high schools and colleges, places that they say are filled "with paid field organizers, daily activism initiatives, and endless waves of leftist propaganda." However, organizations set up with a non-profit status are not allowed to directly participate in political activity, which is something TPUSA appears to always be involved in.

Alleged violations range from funding conservative college SGA candidates to supporting Trump in the 2016 election, according to a recent report from The New Yorker.

Also, let's not forget about the time TPUSA members held a protest at Kent State and wore adult diapers to protest safe spaces on college campuses. 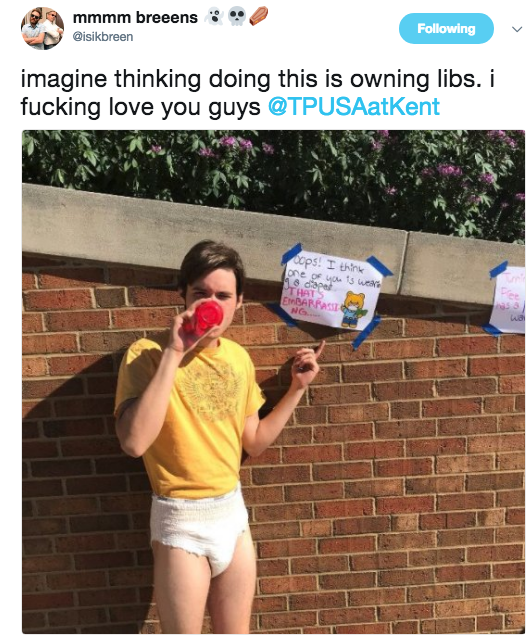