Everything we know about Florida DOT's $2.3 billion plan to fix traffic in the tourist district

With years still to go on the I-4 Ultimate project it might come as a surprise that yet another 40 miles of Interstate 4 about to become a construction site.

The “Beyond the Ultimate” project will take the toll lane-focused rebuild of I-4, stretching the rebuild well into Volusia County, to the east (or north if we're really honest) and all the way past Highway 27 to the west.

While the I-4 Ultimate will mostly widen I-4, thanks in part to the low-cost residential land that border the interstate, the Beyond the Ultimate has to get a bit more creative with its extra lanes, due to the astronomical land costs in the tourist district.

Two extended areas of I-4 will now feature bridge viaducts, with general use lanes stacked on top of the exit and express lanes. This double decking of I-4 means the elevated ribbon-style exits that the I-4 Ultimate will feature can’t be used.

It also means significant new concerns for nearby drainage.

Some of the is also in the Reedy Creek Improvement District, which has much more stringent drainage rules. When the project is complete in the mid-2020s, 74 drainage ponds will cover 135 acres near I-4.

One of the largest and most visible drainage areas sits just outside of Walt Disney World. After years of talking about it as a possibility, the Florida Department of Transportation has now confirmed that it will be purchasing the Crossroads on 535.

Disney developed the plaza in the late 1980s, around the same time it also built the nearby Vista Way apartment complex. Now both look to be on the chopping block.

Disney sold off the years ago, but its entrance just across from one of the primary WDW entrance gateways meant that the plaza has remained a hot spot for tourist and CMs alike. M

any of the businesses in the plaza see some of their highest sales chainwide at this location. The intersection in front of the plaza is the primary entrance to the Disney Springs area and features numerous third-party on-site hotels along Hotel Plaza Boulevard.

The traffic entering and exiting Disney property clashes with traffic attempting to access the nearby Palm Parkway and the southern end of the Dr. Phillips area.

To alleviate all of these traffic woes, while also addressing those drainage issues, FDOT has designed an intricate exit with numerous bridges crisscrossing the area. On the eastern side of I-4 (the Vista ), a new bridge allows from traffic traveling south from Vineland Ave to 535 to ‘fly-over’ the intersection. The bridge will also eliminate the traffic signal for southbound traffic on 535 and will connect to the eastbound exit ramp.

On the west side of the partially double-decked I-4, a new looping ramp covers the majority of the Crossroads property. Those exiting from the westbound I-4 to Disney will exit to the west of the Radisson and Waffle House, just like now, but then they will stay in the far right lane, crossing under a bridge, then looping around before driving over the bridge they just passed under.

Updates to the 535/Palm Parkway are also included, as well as a new bypass street that wraps behind the nearby Miller’s Ale House. The large looping off-ramp will be surrounded by some of the most extensive drainage ponds along the entire stretch of the Beyond the Ultimate project. The plaza was built on a wetlands area with a large pond along I-4 already. The new ponds will be much larger.

The massive new interchange means Crossroads businesses will need to close soon with FDOT giving at most an 18-month notice. of way acquisition will commence this year, with it expected to take roughly 4 years.

The numerous retail outlets in the plaza are expected to relocate to other nearby plazas, including a massive new outdoor shopping center currently under construction on Daryl Carter Parkway. The Vineland Pointe shopping complex will be three times the size of Crossroads. Just across I-4 another major new development, O-Town West, is also in the works.

Daryl Carter Parkway should be a fully functioning interchange open by the time O-Town West opens.

If driving in circles around retention ponds isn’t enough to excite you, the Sand Lake Road interchange surely will. FDOT is adding a diverging diamond interchange here. Travel lanes will cross over each other and while underneath I-4 will drive on the opposite side of the street. A flyover exit will also allow drivers to exit directly to Turkey Lake Road. It sounds like a great place to sit in traffic and watch all the tourist confused by the cars driving on the left side of the street. 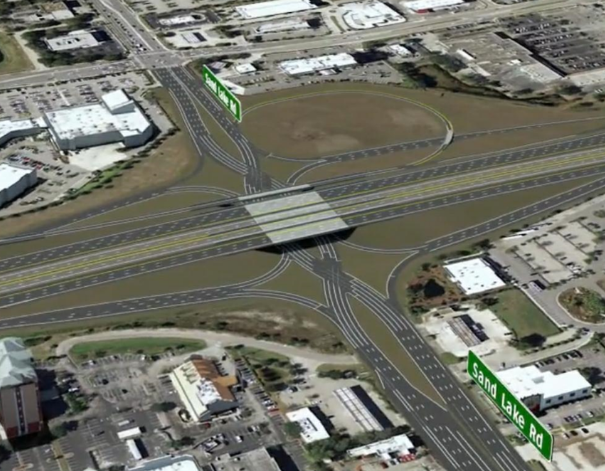 Altogether, the 20-mile southern Beyond the Ultimate project will include 62 new bridges and 27 replaced bridges, not counting the double-deck style viaduct bridge lanes.

Nearly the entire southern leg of the project also includes a rail corridor along the middle of it, thanks to that amendment in our state constitution meant to build a high-speed rail line. Rick Scott rejected the voter-approved high-speed train, along with $2 billion in federal funding for it, but the amendment mandating it is still in our state constitution, and that means this I-4 project must abide by it.

Thankfully, the Beyond the Ultimate project will also include many pedestrian upgrades, including 10-foot-wide sidewalks along 535 and new pedestrian-friendly crossings on Sand Lake Road.