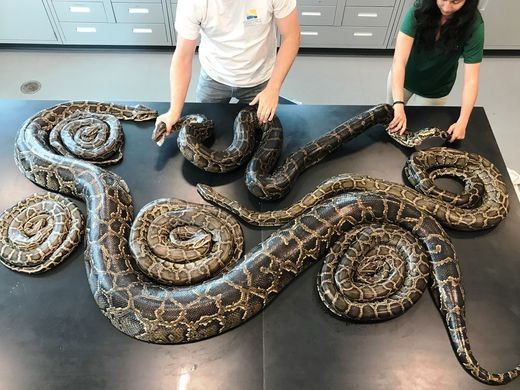 An invasive Burmese python with a surgically implanted tracking device led Florida researchers to the largest python "aggregation" ever found in Collier County.

A couple of days before Valentine's Day, a male python (or sentinel) nicknamed Argo was fitted with a tracking device and led researchers with the Conservancy of Southwest Florida to a 100-pound female python about to lay eggs.

The researchers found Argo with a pregnant gravid female weighing about 115 pounds and seven other male Burmese pythons. The eight were the most snakes ever found in one place within Southwest Florida and the western Everglades, reports the Naples Daily News.

The Burmese python problem has became such an issue in Florida that the Florida Wildlife Conservation Commission allows for the killing and removal of Burmese pythons without a permit. In fact, the FWC encourages people to remove and kill pythons from private lands whenever possible.