Surterra will debut its Orlando Wellness Center on April 19 at 2 p.m. The dispensary is located in the SoDo District at 1743 S. Orange Ave., about a block north of Kaley Street.

Surterra's products include transdermal patches, vape pens, oils, lotions and sprays. The Orlando dispensary will feature a kitchen and garden. Visitors don't have to show identification to get into the dispensary, says Monica Russell, a spokesperson for the company. Surterra also provides statewide delivery and has five other locations in Florida.

"It's been described by many as feeling more like a medical spa, very clean and inviting," Russell says. "But we wanted it to feel more like a home. Anyone can walk in – people who are patients, prospective patients, even people who want to learn more or are against it."

Russell says the medical marijuana dispensary will also includes a space where local community organizations can meet, like a cancer survivor support group or doctors interested in knowing more about cannabis.

"The idea is to remove the stigma," Russell says. "We want it to be a place where people feel comfortable taking a child or elder parent or anyone in between." 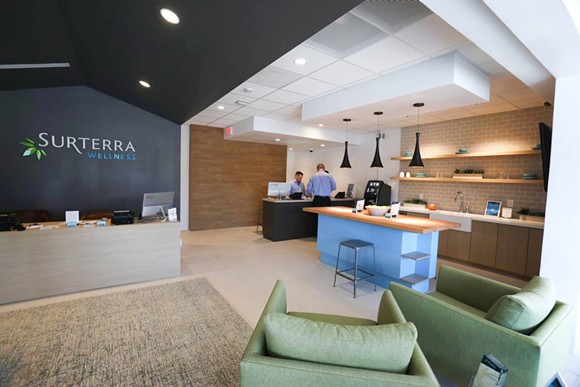 Last month, the medical marijuana provider filed a lawsuit against the City of Orlando after it was told by city staff that it wouldn't be able to operate at its current location because of its proximity to a residential neighborhood.

"Surterra has spent a significant amount of money on building and other expenses in preparation for opening a (medical marijuana treatment center) at that location," the lawsuit, filed in Orange County Circuit Court, said. "Surterra is losing thousands of dollars per day that this location sits empty."

The Orlando City Council adopted an ordinance on June 5, 2017, that prohibited medical marijuana dispensaries within 200 feet of a residential zoning district and within 1,000 feet of a church, school, park, day care center, or treatment and recovery facility.

But two days after Orlando commissioners adopted those regulations, Florida lawmakers enacted their own rules that gave local governments two options – either ban dispensaries outright or treat them like pharmacies.

Local officials have said the city's rules would be "grandfathered in" because they were passed before state law. Currently, there are two medical marijuana dispensaries within city limits.

"This is a classic case of a local ordinance that both conflicts with state law and seeks to regulate an area that the state has expressly pre-empted," an attorney for Surterra said in the lawsuit. "Orlando’s improper enforcement of the ordinance has harmed Surterra and wrongfully prevented the opening of its MMTC. Further, the people of Orlando are losing out on access to constitutionally recognized health care for no valid legal reason."

Orlando Weekly reached out to city officials for a comment but did not receive an immediate response.

Russell says after resolving some issues with the city, the Orlando dispensary is ready to officially open.

"I can't convey how excited everyone is to have this Orlando location open," she says. "Orlando is the epicenter of the state. … It's a really great location in downtown, plus it serves a lot of people in the I-4 corridor, even as far south as the Treasure Coast and Stuart. It's going to make a difference for people to see that this a good thing in the community."