OK, Orlandoans, Sanford's about to one-up us yet again.

A new food hall is coming to the historic Sanford railroad depot at 212 W. First St., and they're bringing a hodgepodgery of food vendors.

Henry's Depot, a self-described "culinary collective," will see the first Sanford outpost of vegan vittle joint Dixie Dharma as one of the primary occupants.

Other food vendors signed on include the Twisted Greek — serving gyros, saganaki sticks, souvlaki and such — and the Nutty Peanut which will offer premium nut butters and sandwiches.

Owner Sean Kelley, who also serves as president of Saint Lawrence Title in downtown Orlando, purchased the building in February of last year and had visions of turning it into a brewery, but saw an opportunity for something different.

"The building is perfectly laid out for a food hall concept," Kelley says "and I'm really excited to create this cool culinary experience."

Kelley will situate his Florida-themed bar concept called The Basin at the back of the rectangular 7,500-square-foot space and allow patrons to order food from any of the vendors.

"It's what sets us apart from other food halls like Tampa's Hall on Franklin. We have one point-of-sale system for the whole building so if you're enjoying a drink at the bar and get hungry, the bartender will take your order and your food will be brought to you."

In addition, Kelley says he's allowed food vendors to sell beer and wine in bottles and cans "for the sake of the guest experience."

Kelley is on the verge of signing on a

pizza vendor (rumor has it Pizzeria Roberti may be moving in), as well as a coffee purveyor for the food hall. He also has plans of offering wild game sausages from one of the smaller stalls.

A parapet with cupola will be added to the main entrance along with a front porch. Side decking and a back deck will offer additional seating.

(Kelley shared drawings of the site plan which can be accessed below.)

The old railroad depot has some history behind it. Ulyssess S. Grant took part in its groundbreaking ceremony in 1880. In 1883, Henry Plant made it a part of his railroad system, thus the name Henry's Depot.

Numerous artifacts (old railroad track and railroad ties) were found as demolition began which, Kelley says, will be incorporated into the food hall in some way.

Henry's Depot is slated for a late summer opening. 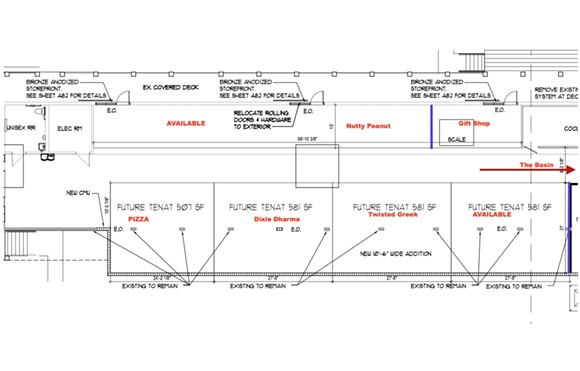