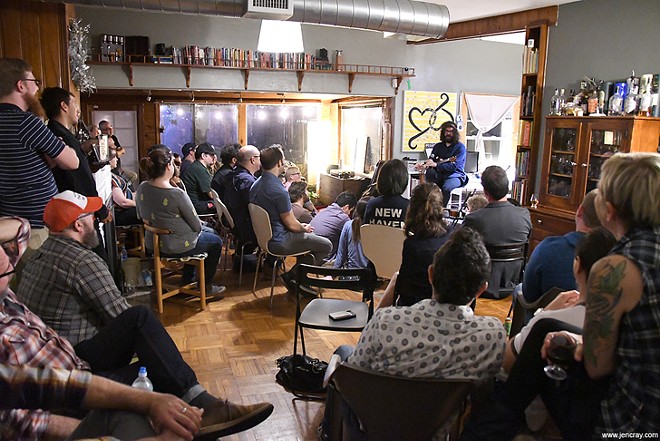 In the past year and a half, OW photographer and longtime music scenester Michael Lothrop has made a couple of major music-fan dreams happen in his living room. The previous one in late 2016 was hosting Eric Bachmann (Archers of Loaf, Crooked Fingers) for a special house show, which is a rare up-close thrill that few ever get to have with a star.

The latest one, fixed by Tierney Tough’s OYG Presents, was at least on par with that, which is news she should be happy to read since she couldn’t attend herself due to her own prime-time happenings as part of Beach Slang’s touring band (go, Tierney). Like Bachmann, Lou Barlow is another American indie hero who packs the cred of multiple canonical acts in his CV, the most notable being Dinosaur Jr., Sebadoh and Folk Implosion. And before a sold-out (actual) house, he gave a generous two-hour engagement.

One of the immediate bonuses of this kind of access is the ability to shout out requests and actually get heard and possibly obliged, something Barlow himself reminded the audience about throughout the show. The performance included songs from all three of his noteworthy bands. He did a cool thing with the Folk Implosion hit “Natural One” by fusing it with Smog’s “A Hit.” And through urging from the room, he wound up turning a conversational tangent into a Tammy Wynette cover (“Set Me Free”) that had as much soul as it did mirth. 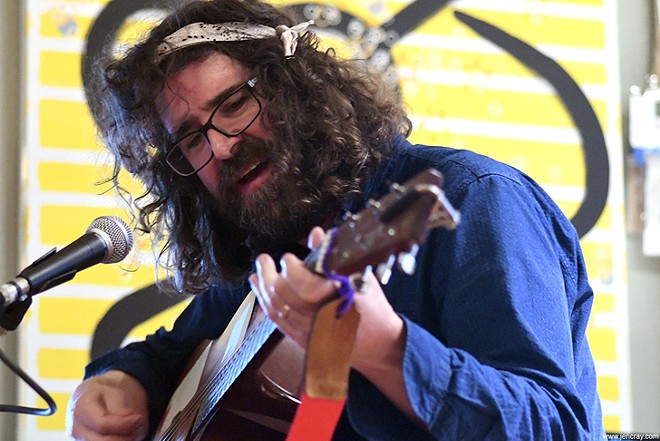 Really, though, this setup offers a depth of experience greater than that. Sonically, it’s the kind of performance that’s raw, pure and unfiltered, an interesting light for an artist like Barlow who’s made multiple careers riding sometimes ear-ravaging rock sounds. And hearing his songs breathe so differently was fresh.

Another special aspect to a show like this is its exceptional intimacy. Depending on the person, it can make for an encounter of a lifetime. And with his generosity of candor, Barlow was just that. Though a bit reluctant at first (and perhaps inherently), he actually proved to be a big, interesting and open personality. There was unblinking humanity, like in the current story about his father having open-heart surgery (successful, by the way) the very day of this show. There was humor, lots actually, that only blossomed throughout until it verged on standup-worthy by the conclusion. There was even a mid-set tax-day text received from his accountant.

Of course, there was also lots of great backstory for many of the songs he played, like conflicts between producers in the studio and such. In sum, it’s a fan fairy tale. I mean, how many Lou Barlow shows have you been to where the door guy was an adorable Corgi? Apparently a noob to the house show thing himself, Barlow was amazed by the personal munificence behind this kind of event.

House shows like this cut through almost all barriers between audience and artist, allowing only the purest communion with music, face to face and warmed by the same fire. It’s as direct a glimpse inside as it gets. This wasn’t just hearing Barlow’s music in a new way, it was engaging Lou Barlow the person. Not a bad way to experience a legend. It’s the kind of story you tell your kids once they’re old enough to be cool.