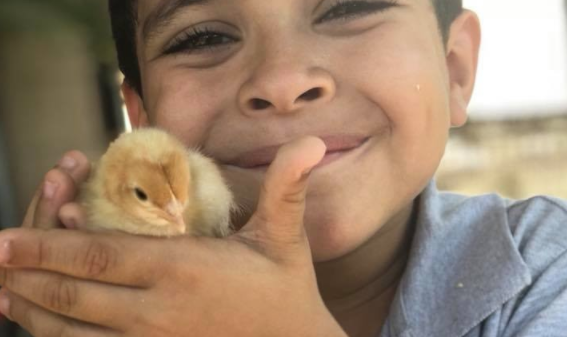 JFC, sometimes we just need a little good news, you know? So after today's high-school shooting, allegations of corruption and handout of federal dollars to charter schools, here's what we have for you: a freaking adorable baby chick named Grilled Cheese.

Monnas submitted a photo of her son holding Grilled Cheese, one of her family's new baby chicks, as part of the contest hosted by Purina Animal Nutrition this week. "Here's my best photo of my son and his chick, Grilled Cheese," she wrote on the Purina Poultry Facebook page.

"He handles each of our four chicks several times daily, which is amazing, considering he can't keep his room clean for any amount of time!"

Hundreds of fan votes for Monnas and Grilled Cheese (and, tbf, her son's amazing eyelashes) vaulted them into the finalist round. She'll compete against eight other finalists in the final round on April 23 on the Purina Poultry Facebook page.

If she wins, Grilled Cheese gets the title of Purina’s Strongest Chick in America and a year’s supply of Purina poultry feed.

And there you have it. We all just stopped thinking about the bad news for at least 30 seconds – thanks, Grilled Cheese.