After spending millions on updated queues, Disney has come to accept that most guests still would rather spend that time on their smartphones. With this in mind, Disney has now announced a new line of apps that will enhance the park-going experience.

The Play Disney Parks app will include games accessible only to guests in specific geographic locations. The in-app experience will change from attraction to attraction and will include real-world effects that are set off by in-app gameplay. Early renderings of the app show a major design influence Mary Blair's "It's a Small World."

Disney has spent millions on technology to provide guests with a customized park experience that includes their names and details being used in rides, at Meet-and-Greets, and throughout the parks. But the technology, which was initially tied to MyMagic+, has mostly lain dormant since installation. This new app, built off the same technology that powers MyMagic+, seems to use much of that pre-existing in-park technology, while also possibly harnessing other game tech found in the parks, such as the Sorcerers of the Magic Kingdom-themed video portals. 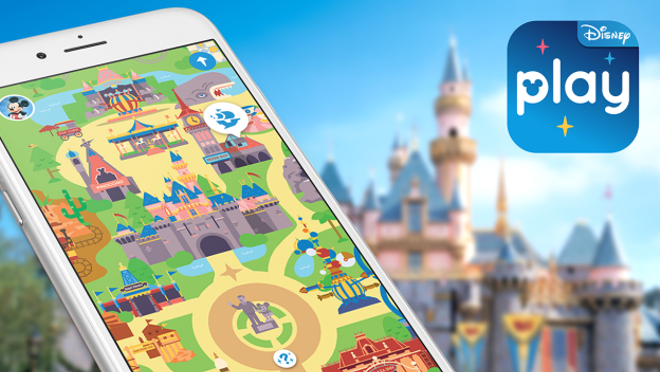 Since 2016, guests have been able to use their smartphones while playing Epcot’s interactive scavenger hunt game "Agent P’s World Showcase Adventure." This new app looks to use technology similar to that used in the Agent P attraction, but across all U.S.-based Disney parks.

In the announcement for the new app, Disney has pointed to other updates in their pre-existing apps, including the My Disney Experience app where they recently rolled out Digital Key, which allows guests to unlock their hotel rooms via their phones.

Another major addition to that app is bus wait times. Originally tested within the app in 2016 but quickly pulled, the feature has begun to reappear within the app for certain users over the past few weeks. Disney has yet to confirm if the recent rollout is part of a test or will be a permanent addition this time.

The Play Disney Parks app will launch this summer on both Android and iOS and is free to download.