Beyond the tourist veneer, Raglan Road is a conduit of real Irish music

Tourists will buy anything. Natives, however, are a tougher sell. And because of its zeal for themed contrivance, everything Disney is to be taken with a boulder of salt if you’re local. That’s why – with perhaps the exception of the well-known national touring roster at House of Blues – you’d be forgiven for harboring certain assumptions about the entertainment out at Disney Springs. But Raglan Road, the entertainment complex’s Irish pub, actually serves up some authenticity.

The pub’s got all the requisite gloss, of course. Unlike in the theme parks, however, the acts performing here aren’t just costumed facsimiles. Scouted by co-owner John Cooke himself, Raglan Road’s live programming is a revolving showcase of real Irish talent, most of it directly imported from the homeland and some quite notable like the Young Dubliners recently here for its St. Patrick’s Festival. In fact, what Raglan Road does with many of its headliners is essentially give them residencies, so a featured act can be enjoyed there for weeks or even months on end. And across two stages – a main one inside and a patio one – the pub showcases four acts every night.

Now, of course this is an Irish pub – at Disney, no less – so the music must breathe with enough recognizable tradition. Don’t go expecting to hear the Undertones or Stiff Little Fingers (although headliner Jig Jam did slip in an MGMT cover). But the range on display went from traditional to contemporary.

Outside on the patio stage on a recent night, the Byrne Brothers from Donegal were attracting attention. Comprised of three young brothers (ages 8, 11 and 13) and their father, the family unit lean traditional with banjo, accordion, whistle, bodhrán and guitar. Particularly good is middle brother Finn on banjo. And just to make us all rethink our youths as idle passages of underachievement, the boys are also Irish dance champions. That grabbing combination of skill and youth drew throngs of onlookers from outside the establishment. The Byrnes will be here through June. 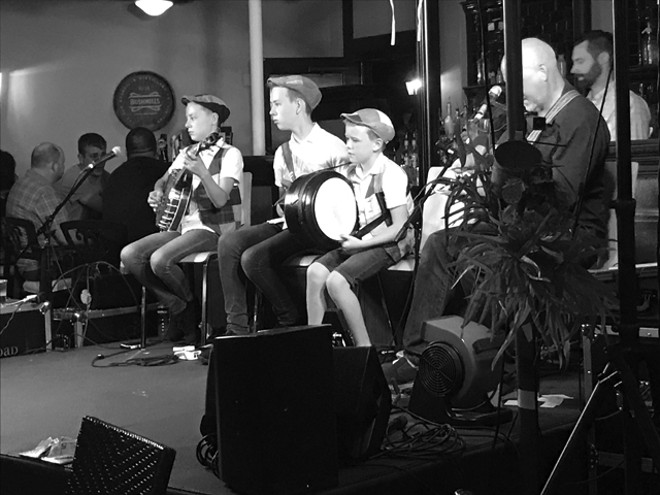 Inside on the main stage during the prime dinner rush is the featured “One Heck of a Hooley” show, a full extravaganza of music and dance. This night, Briste provided the music.

They performed a blend of Irish roots and American country with some contemporary pop flourish, but the traditional numbers are where their technical musicianship is really on shine. And every few songs things peak with the storming power of a vigorous jig crew to really embody the music in dance.

But later around 10:30 p.m. is when things get a little more earnest for the headlining band with a focus more on pure music than spectacle. And that’s really when the spot becomes a music hall.

Raglan Road’s current major headliner is Jig Jam. The decorated Tullamore string band are definitely on the polished side of the folk coin. But they specialize in a signature blend of Irish tradition that’s made particularly distinct by its fusion with bluegrass and Americana. Through their skilled playing and interpretation, it’s a combination that’s natural, effective and defining. Their residency concludes this Sunday (April 29) so don’t sleep.

Considering the area’s many expats, there’s a sizeable thirst for real Irish culture. And though the tourist setting may overshadow it, Raglan Road is a bastion of it here in Orlando. The stage action is lively, immersive and, if you dig in a bit and stay later, more than just flashy façade. And it’s reason enough to wade into Disney Springs more often than the occasional Flogging Molly or Dropkick Murphys show at HOB for a Celtic kick.