Busch Gardens Tampa may finally be getting a new roller coaster 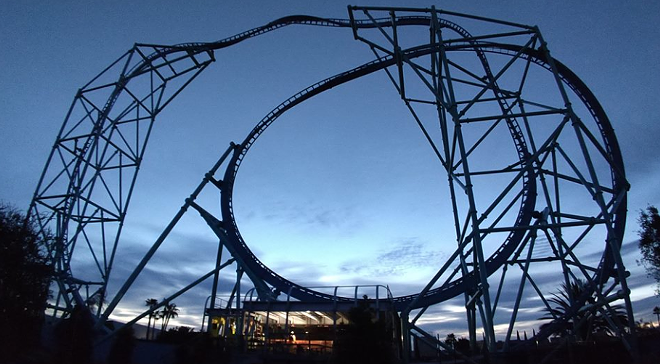 With numerous attraction closures over the past few many have been asking when Busch Gardens Tampa will finally be adding a new ride. There are now strong rumors that next year that the Tampa park might be adding their first new attraction in three years.

Touring Central Florida, a local theme park news site focused mostly on the SeaWorld family of parks, has uncovered a batch of new trademarks related to entertainment services. Two of the three trademarks are tiger related, Tigris and Twister Tiger, while a third, Uproar, is less tiger focused but could still be used in a tiger-themed attraction.

As noted by Touring Central Florida, the trademarks are filed by SeaWorld Parks and Entertainment and could be used at any of the chain's 12 parks, but Busch Gardens Tampa is the only one with tigers.

One strongly rumored new attraction is a Sky Rocket II coaster from Premier Rides. The 150-foot-tall launch coaster features an intense mix of in-line twists and a non-inverted loop. SeaWorld Parks installed the Sky Rocket II coasters at Busch Gardens Williamsburg in 2015, and another is opening at SeaWorld San Diego May 10.

Many industry insiders believe that the SeaWorld Parks contract with Premier Rides involved purchasing three of the Sky Rocket II coasters. Buying three of the off-the-shelf coasters at the same time means the struggling chain saves money when compared to creating a new ride from scratch.

With two now installed, the question has been where the third will be located. SeaWorld San Antonio saw Wave Breaker, a jet ski-themed launch coaster, open last year, so a new attraction is less needed there than many of the other parks in the chain. The ride involves multiple pass-throughs of the loading station meaning that only one ride vehicle can operate at a time.
This dramatically reduces the per hour capacity of the ride, with only 550 people per hour at full operations, meaning that it’s unlikely that the coaster would be installed at SeaWorld Orlando, the chain’s busiest park. That leaves Busch Gardens Tampa as the most likely location for the new coaster.

In February, Busch Gardens Tampa also saw Jungala, a kid-focused area of the park with tiger habitats, close for a few days, while no details were given on the closing it might be related to the rumored new attraction. The Jungle Flyers kids ride in the area has remained closed.

This area is directly next to the now closed Tidal Wave attraction. Permits were pulled in early April for the demolition of Tidal Wave. The permits note no trees or buildings, other than the attraction itself, will be removed. The Sky Rocket II has a narrow design, meaning that it could likely fit within the former Tidal Wave pathway with just a little remodeling of the area. Being an off-the-shelf ride with little customization also means a much quicker construction timeline.

While the Sky Rocket II is the leading rumor, others have pointed to the trademark “Twisted Tiger” as a possible sign of a Rocky Mountain Construction Group update to the currently standing but not operating wooden coaster Gwazi.

RMC is known for their dramatic remodeling of wooden coasters, and the ‘twisted’ term is a common term used in these updated coasters. But as Touring Central Florida pointed out a redo of Gwazi would be costly and SeaWorld Parks aren’t in a position at this time to drop lots of money on a new attraction. RMC is also one of two coaster companies rumored to be working with Universal Orlando on a new Jurassic Park themed wooden coaster. The company chosen for that project may sign a non-compete clause, similar to the one that Kuka reportedly signed when developing the Harry Potter and the Forbidden Journey ride.

Either way, if Busch Gardens Tampa is getting a new ride in 2019 we should be hearing something from the park in the coming months.