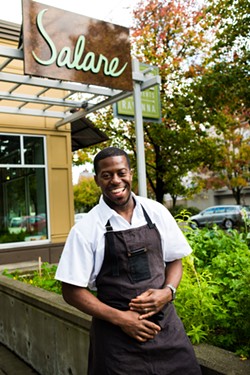 We all know that Central Florida was shut out of the James Beard Award nominations this year (grr), but we can sorta claim chef Edouardo Jordan, who Monday night won both the Best New Restaurant and Best Restaurant Northwest awards.

He's from St. Petersburg! And he studied at Le Cordon Bleu College of Culinary Arts here in Orlando! Practically one of our very own.

After Le Cordon Bleu, Jordan landed an externship at the French Laundry in California's Wine Country, and after that moved to Seattle. Last night the JBF awarded him Best Chef Northwest for his first restaurant, Salare, which serves cuisine inspired by "America’s South, Africa, Europe and the Caribbean Islands," according to the restaurant’s website.

Check out a longer interview with Jordan over at our sister paper, Creative Loafing Tampa.