A new Florida-based rocket startup is taking a stab at the multibillion-dollar commercial launch industry by 3D-printing tubes of propulsion fuel – a low-risk means of thrust but a high-risk venture to compete with space giants like SpaceX, United Launch Alliance and Blue Origin.

Rocket Crafters Inc. hosted local public officials and media this week in its discreet Cocoa Beach manufacturing facility to view a test fire of the company's small (but mighty) hybrid rocket engine. A hybrid engine – one that uses both liquid and solid fuel – is rare among rockets designed to lift today's standard of small satellites. A hybrid engine with 3D-printed fuel is even more uncommon, but RCI says its technology will revolutionize (not evolve) the commercial space industry.

Fueled with a thin, 2-foot-long cylinder of 3D-printed plastic, engineers ignited the rocket's engine on a horizontal testing mount for 10 seconds. It unleashed a powerful tail of fire that RCI VP of propulsion Robert Fabian said can push up to 450 pounds. Unlike the components of nearly all rocket engines today, RCI said its cylindrical fuel sticks are nontoxic, nonexplosive and contain large amounts of the same materials used to make LEGO bricks. 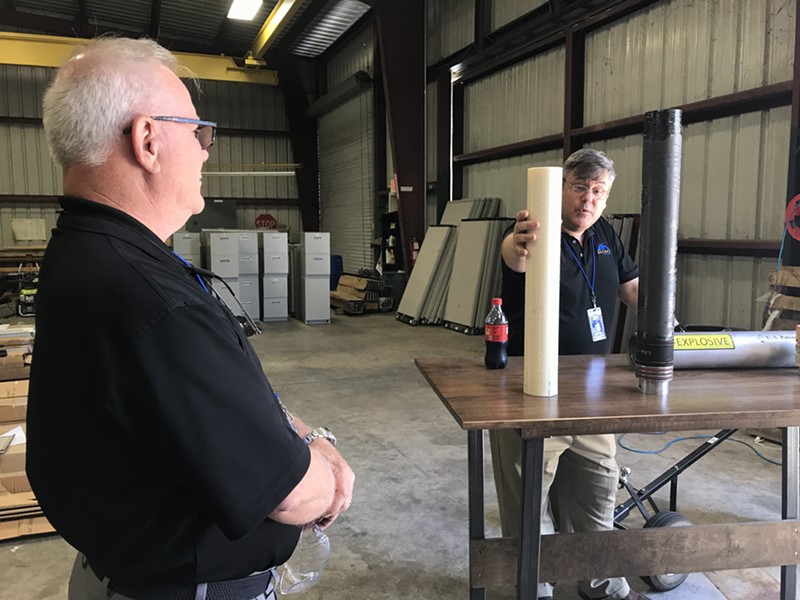 "The purpose of you being here today is to actually witness a smooth, burning, consistent working hybrid rocket engine, which we believe is going to revolutionize the way you access space," said chief executive Sid Gutierrez in a conference call. "We are not trying to evolve technology. We're trying to revolutionize it."

In the early 2000s Gutierrez ran into Ron Jones and Paul Larson, who both now lead the company with Gutierrez and had the original plans for their hybrid rocket engine. Their concept rocket Intrepid-1 will send small satellites into short polar orbit.

After patenting the 3D-printed fuel mechanism, RCI won a $600,000 research and development contract from the Defense Advanced Research Projects Agency to manufacture a more powerful rocket that can lift up to 5,000 pounds, Fabian said.


The engine tested Monday will be paramount to the company's main goal of entering the small-satellite business as one of the many new launch providers seeking to normalize access to space. And as the demand for satellite launch services grows, so too does RCI's eagerness to put a capable rocket on the launchpad. Looking at Goldman Sachs' positive market expectations for the future of the so-called smallsat market, Fabian said "we could do a launch a week from each of those launch sites and still not have more than about 20 percent marker share."

"The demand is huge but the real issue here is supply. So we aim to meet that supply with an inexpensive and safe rocket engine."

A 20 percent market share is a bold aspiration for a company with just 15 employees. But Gutierrez and his team are confident as the culture of spaceflight startups – as well as their own business model – become increasingly resourceful. By 2020, Fabian predicts, RCI will have Intrepid-1 ready for launch.

"We're already in discussion with the folks with the Cape Canaveral Air Force Station and Space Florida on using one of the pads out there," Fabian said. The company has initial smallsat customers lined up, some of which will receive discounts for flying payloads on its debut launch of Intrepid-1.