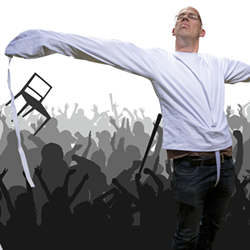 Mr. Kevin Haggerty (Rob Gee) is an articulate, charismatic man surrounded by idiots who only want to pump him full of medication, so that pharmaceutical companies can get rich and Kevin can be as depressed as everyone around him. It would be impossible not to be outraged by the injustice of his plight, except for one thing: Kevin is a delusional mental patient who insists he’s the reincarnation of Ramses II, and persists in escaping from involuntary hospitalization. While on the lam, Kevin detours from his ascension to Egyptian throne in order to rescue – or possibly kidnap – a lost little girl, and finds a piece of himself in the process.

Kevin, King of Egypt is the final chapter in a mental health-themed trilogy from psychiatric nurse-turned-slam poet Rob Gee, who previously performed Fruitcake and last year’s Forget Me Not at Orlando Fringe to great acclaim. Here, Gee (under the briskly paced direction of Tara Garther) plays the title character, plus a 7-Eleven security guard, an alcoholic widower and several others, subtly shifting his voice and posture with each persona in this obsessively-compulsively watchable one-man performance.

This show forgoes Forget Me Not’s Seussian rhyme schemes, instead slipping almost imperceptibly between prose and free verse, and it trades the whodunit plotting for an intimate family drama. But Kevin is still crammed with Gee’s trademark mixture of killer wit and medical commentary (“Half the patients think they’re Jesus, but the doctors all think they’re God”) wrapped around his inimitable off-kilter physicality, which is amped up to a manic 11 for this role. Rob Gee might not really be the king of Egypt, but he continues to reign over the performance poetry realm at Orlando Fringe.

Check out ALL of our Fringe 2018 reviews at orlandoweekly.com/fringe2018