An Apopka man was arrested after Florida wildlife officials say he dumped leftover red paint into a burrow, dousing the gopher tortoise living inside.

The tortoise, later named Raphael, was found April 17 by a witness in the middle of County Road 455, south of Montverde in Lake County. The reptile was covered in red paint "from head to toe," according to a report from the Florida Fish and Wildlife Conservation Commission.

FWC investigators visited locations near where Raphael was seen and found a gopher tortoise burrow covered in fresh paint behind a business called RAM Striping. The owner, John Wood, told investigators his employees are supposed to dispose of paint on the property by spraying paint into a five-gallon bucket, letting it dry and later throwing away the bucket.

An employee of the business, 37-year-old Edwin Escalera, told FWC officials he was in a hurry the morning of April 14 while cleaning out the spray machine. He sprayed the paint into a five-gallon bucket, but instead of waiting for it to dry, Escalera told investigators he dumped the paint into a hole behind the shop, the report said.

Escalera said he didn't see a tortoise in the burrow when he dumped the paint inside, according to the report. Escalera also told investigators he didn't know how cement ended up in the burrow. FWC officers found an open bag of cement inside the business and paint sprayed on the grass surrounding the burrow.

Escalera was charged with littering hazardous waste and unlawful possession of a gopher tortoise, which is a protected species. 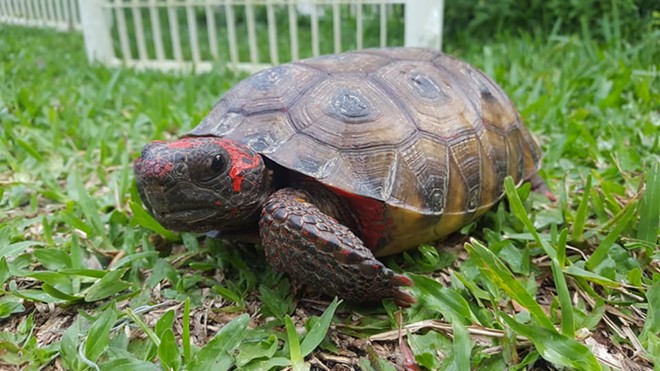 Raphael was taken to Swamp Girl Adventures, a nonprofit that helps rescue animals. The tortoise was scrubbed with a toothbrush, and as of this week, most of the paint has been removed from Raphael's body.

Please don't paint tortoises – aside from being illegal, the FWC says painting tortoises can "inhibit their ability to absorb vitamins from the sun’s UV rays through their shells, has the potential to cause respiratory problems and can lead to harmful chemicals being absorbed into their bloodstream."