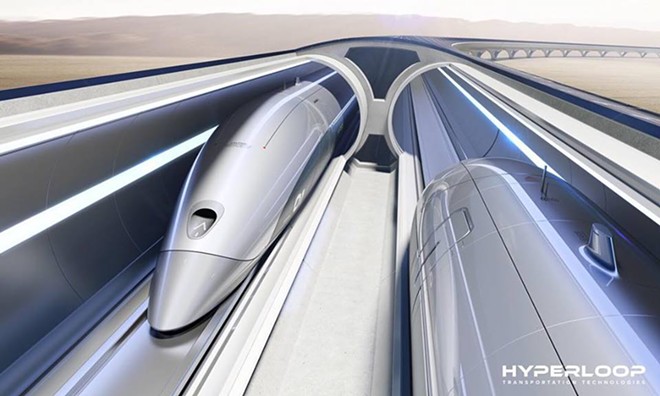 While much of the recent mass transit focus has been on SunRail’s Phase 2 expansion, there are plenty of other transit projects in the works throughout the region.

One of the most innovative is a hyperloop that’s being proposed between Orlando and Miami. Last year, that route was one of 10 selected by Virgin Hyperloop One to move forward on.

Now it looks like a second hyperloop project is in the works for Central Florida. According to the Orlando Business Journal, California-based Hyperloop Transportation Technologies is in discussions to build a hyperloop between Orlando and Tampa. Central Florida regional planning organization MetroPlan confirmed to the Orlando Business Journal that it has a meeting scheduled with a hyperloop company. HTT also has an Orlando based design position listed on the company's website.

The new Orlando to Tampa route would likely use right of way along the median of I-4 that was set aside for a proposed high-speed rail. That system was approved by voters, placing it in the state’s constitution, and had full funding in place but was blocked by Governor Rick Scott after his Tea Party base expressed disapproval of the Obama-supported system. The federal funds for that project are now being used to help finance a high-speed rail system currently under construction in California. Some have pointed to the hyperloop projects in Florida as a way for Rick Scott to regain some of the support he lost by blocking the voter-approved high-speed proposal, but he has shown little interest.

Ironically, the private operator of the high-speed rail system here was to be Virgin, who is now moving forward with their own Orlando-to-Miami Hyperloop proposal. The proposed route for the Virgin Hyperloop One uses that same high-speed rail right of way between the Beachline and Davenport before following Highway 27 south.

The HTT proposal comes as a bit of a surprise after their CEO, Dirk Ahlborn, seemed less than interested in projects in the United States. In March, while at a transit conference in Tampa, Ahlborn sat down with the Tampa Bay Times to discuss hyperloop technology. In that interview, Ahlborn expressed frustration with how long projects take to get approved in the United States; “Right now, very honestly, the U.S. is fairly complicated ... To be honest with you, democracy sometimes in of things is a problem … If the in the Emirates wants it, it’s going to be built. It’s a little bit faster in other areas.”

The high-speed train right of way along I-4 would eliminate some of the complications that a system starting from scratch may encounter. This might be part of what drew HTT to that route.

In that same interview, Ahlborn also stated that when compared to traditional rail, hyperloop is much more desirable financially allowing for it have more private backers and not requiring as public funds. “Hyperloop, because again, the operational cost is very low, can be profitable in a very short time span. The feasibility studies that we’ve done so far show a return on investment from eight to 11 years, which is something that’s never been seen so far.”

Ahlborn also sees fares for hyperloop being extremely cheap with various upgrades and other onboard luxuries. In his interview with the Tampa Bay Times, he said a passenger’s attention during a 30-minute trip is more important than the $10 or $20 a ticket may cost. Those prices, while not confirmed, are much lower than other mass transit options under construction around the state. Preliminary costs of a business class ticket aboard the Orlando to Miami higher-speed train Brightline, which is currently under construction, is estimated to be $143. That train is expected to take nearly three hours compared to the Virgin Hyperloop One route, which will take an estimated 26 minutes.

Cargo is also a key focus for hyperloop systems. Both the Miami and Tampa proposals would have cargo shipping as a use for the systems; this also helps make the operations more profitable than passenger only transit.

Preliminary studies for the Virgin Hyperloop One are currently taking place with the goal of cargo being shipped along the route within two years and passengers within three. No timelines or other details have been released yet regarding the HTT proposal.