Fringe 2018 review: 'All Pucked Up' lends visibility to the Filipino experience 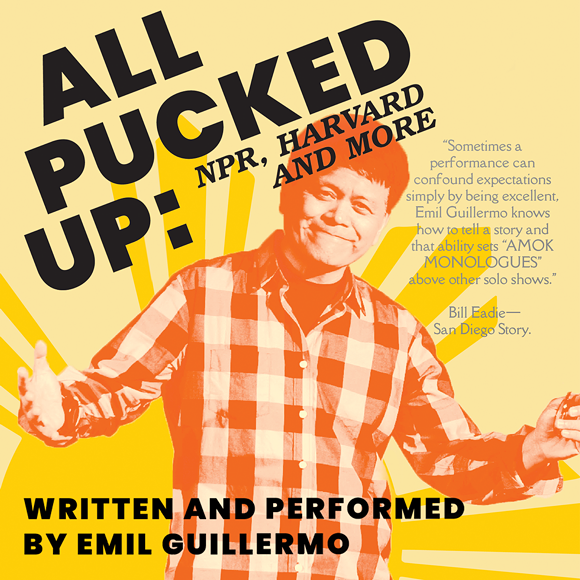 “I don’t have white privilege, I have white voice privilege,” quips former NPR host Emil Guillermo. Guillermo (pronounced Gil-yer-mo, despite what some NPR anchors may say) has scoured the libraries of Harvard to connect his personal heritage to history. His story shines light on the oft-ignored story of Filipino people in the United States.

Guillermo shifts his radio-smooth voice into exaggerated accents and mannerisms. If his gong annoys you, if his spectacle at times makes you uncomfortable, if the account of injustices fly at you too fast to even process, that’s the point. Guillermo is at a breaking point with microaggressions and invisibility. He tells us he is like a coconut: “Brown on the outside and shredded on the inside.” He is ready to run amok.

At first, I had trouble tuning in to Guillermo’s frenetic, disjointed delivery. Was this standup, a monologue, a rant? But as the jokes, personal plotline and historical accounts continued, I settled in and began to enjoy trying to keep pace with Guillermo’s brilliant mind.

The story takes more shape as he shifts into the characters of Filipinos from the past like “Jimmy Bob” Amok, a man who performed in an exoticized sideshow at the 1904 World’s Fair, and world champion boxer Francisco Guilledo. The NPR name-drops are fun for public radio geeks, while the account of fighting the station to publish stories impacting his people will give you pause.

This wandering tale is at its most emotionally engaging when Guillermo talks about his father. An anecdote about how his dad wrote love poems for his lonely immigrant friends was funny and poignant. Guillermo realizes his father is not just an “awkward Filipino man,” that his story exists in a larger context of history. If you can handle the eccentric delivery, All Pucked Up is an important look at the how lack of representation tries the soul.

Lowndes Shakespeare Center, Studio B
Mills 50
Orlando, FL
(407) 648-0077
Performance Space
Map
Check out ALL of our Fringe 2018 reviews at orlandoweekly.com/fringe2018