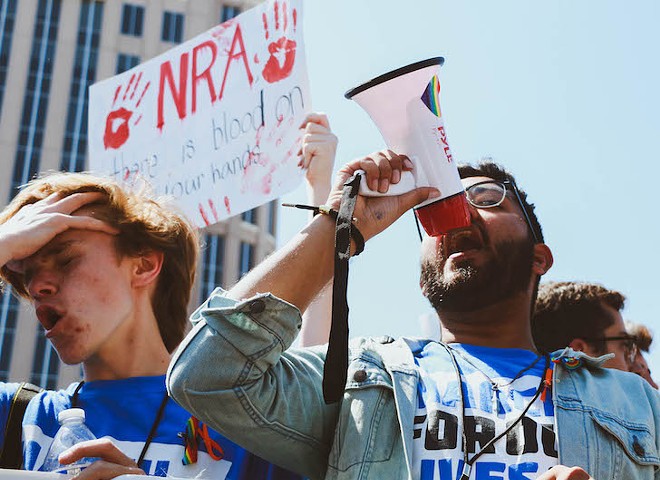 Today, Parkland shooting survivor and harsh NRA critic David Hogg will encourage people to protest Publix grocery stores by lying down in the aisles for 12 minutes, beginning at 4 p.m.

This show of solidarity is in response to a Tampa Bay Times report that showed that the grocery store chain gave an unprecedented $670,000 to self-described "proud NRA sellout" Adam Putnam, a Florida politician who has spent his career attempting to loosen our state's gun laws.

This morning, Orlando Sentinel columnist David Whitley published arguably the worst take yet on today's planned protests, stating that "a calm, respectful dialogue is the only way we’ll ever achieve 'sensible gun control,' whatever that means."

"I suggest buying a box of delicious Publix fried chicken and asking the would-be corpse to get up and discuss the issue over a nice drumstick," says certified big boy Whitley.

In his incredibly condescending column, headlined "Publix doesn't deserve Hogg's 'die-in' treatment," Whitley argues that Hogg will likely accomplish nothing at today's planned protest, and rather than dragging our beloved local grocer and Fortune 500 company through the proverbial mud, the 17-year-old "young oracle," as Whitley dubs him, should just try some good old fashioned civil discourse.

Ah yes, because Dr. King would've had the same results if he had never organized a bus protest and just called the transportation company on the telephone. Or maybe Gandhi should've just had a snack and rang up the Queen of England.

While you may disagree with mentioning a pesky teenager's name alongside the world's greatest humanitarians, the point is that civil rights were never earned in the dark. Meaningful protests are never "appropriate" at the time, and that's the point. That's why they work.

Of course, it should be noted that Whitley also disapproves of black athletes disrupting the NFL's bottom line to raise awareness of police brutality. In a column from earlier this week, Whitley says the "NFL did fans and players a favor" by banning kneeling during the national anthem.

"Players can still make stands or take knees," says Whitley. "They just won’t be allowed to do it in front of fans that paid to watch a football game, not a political protest."

Whitley, a columnist with a history of classically terrible takes like "allowing girls in the Boy Scouts is equal to toxic stupidity" and "I have no idea what democratic socialism is," seems to lack the basic understanding of how a protest functions and that the entire point of a public protest is to be seen and heard.

What form of protest do you approve of, Mr. Whitley? Because it seems that anything short of Hogg standing in a closet alone is acceptable in your eyes. Not to mention, if Hogg weren't so public in his protests, you'd be short a column topic this week.

What's conveniently left out of Whitley's column is that Hogg's goal is to compel Publix to donate money to the victims of gun violence, as well as discontinue their support of Florida GOP gubernatorial candidate Adam Putnam.

I call on @Publix to donate double the money they gave to Putman to the Stoneman Douglas Victims fund, $1,000,000. And never support an A rated NRA politician again.

Whitley also casually leaves out any of the benefits Publix has received from backing Putnam, who is currently the Florida Commissioner of Agriculture. "It’s a proud Polk County product, just like Putnam," says Whitley. "The company’s $670,000 worth of support stems far more from Putnam’s his pro-business positions than his NRA support. Publix said it has never donated to that organization."

This is all true.

But as the Times report discovered, Putnam removed failing Publix health inspections from the public website, and then changed the labeling from a failing grade to "re-inspection required."

That certainly is a "pro-business decision."

As Whitley says, "It’s hard to say where all this will lead, other than advancing Hogg’s career and lining him up for another citizen activism award. That’s probably good enough for Hogg."

Maybe Whitley hasn't noticed that because of the courage of Hogg and his classmates, real social change has already occurred. It was pressure from these kids following the massacre of 17 students and teachers that pushed lawmakers to raise the minimum age of gun purchasers to 21 and institute a three-day waiting period, which the NRA is fighting tooth and nail.

But in Whitley's words, that's just Hogg being a "gun-control diva."