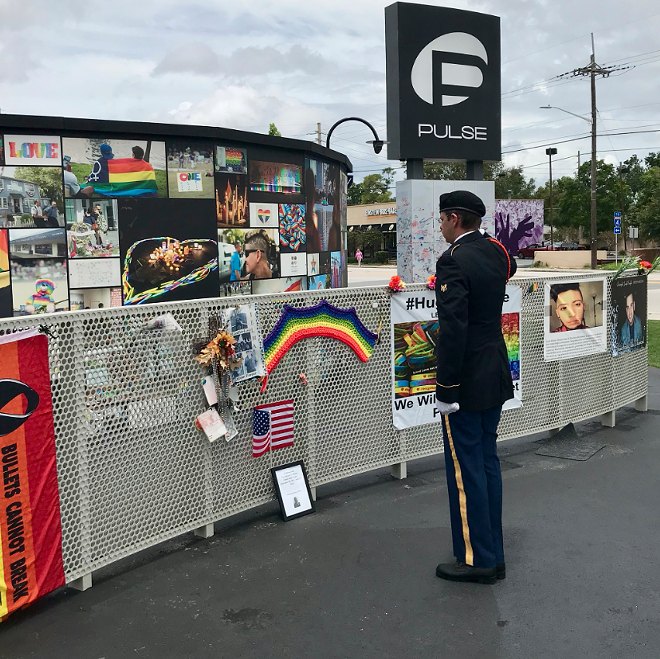 An Army veteran who was killed during the mass shooting at the gay nightclub Pulse was honored Monday with a Memorial Day tribute.

Powerful + emotional Memorial Day video of a uniformed service member paying respects to Cpt. Antonio D. Brown, who was a member of the @USArmyReserve when he was killed along with 48 others during the attack at @pulseorlando on June 12th, 2016. #MemorialDay pic.twitter.com/0mFxTUvsij


Brown was known among his fellow troops for his smile and unwavering spirit. The 30-year-old served an 11-month tour in Kuwait during the Iraq War in 2010 and was promoted to captain in 2012. He was a highly decorated soldier whose awards included a Meritorious Service Medal, two Army Achievement Medals, and the National Defense Service Medal. In 2016, he lived in Orlando and worked at Lowe's as a human resources manager.

On June 12, 2016, he went to Pulse to have fun with a friend. Brown and 48 other people were killed by a gunman who shot up the club in those early morning hours.

After Brown's death, then Defense Secretary Ashton Carter said the attack in Orlando was a cowardly assault on the freedoms that Brown had devoted his life to protect.

"Capt. Antonio Davon Brown served his country for nearly a decade, stepping forward to do the noblest thing a young person can do, which is to protect others," Carter said in a statement. "His service both at home and overseas gave his fellow Americans the security to dream their dreams and live full lives."