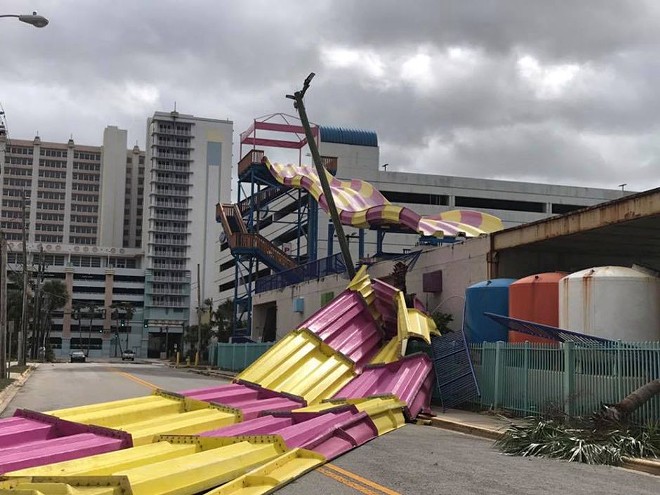 With less than a week until Hurricane Season kicks off and with our first storm of the season already come and gone it's easy to forget that many are still recovering from last year’s storms.

Locally, Hurricane Irma caused some of its most extreme damage in Volusia County. At Daytona Lagoon, a small water park and family entertainment center just off A1A in Daytona Beach, Irma was ruthless. Amazingly, the park reopened within a week of the storm, becoming a community gathering space where many locals went to charge their cell phones and enjoy the air conditioning as other parts of the community still struggled with having power restored.

While park management quickly reopened the arcade and other dry attractions, the water park saw more extensive damage requiring significant updates. Now, more than eight months later, the final slide structure damaged in the storm is about to reopen.

Hurricane Irma ripped the Kraken’s Quest mat racer slides from their tower throwing them onto a nearby street. The park, which was already in the midst of a multi-year $2 million upgrade, used this as an opportunity to improve the aging slide attraction, replacing it with two brand new rides, while using the same tower as the previous ride. Both of the new rides are roughly 54-feet tall.

The first of the two new rides is a thrilling half-pipe slide that riders drop into and slide back and forth on in a pendulum-style motion before coming to a stop at the bottom of the giant U-shaped structure.

The second ride is a multi-colored four lane racing mat slide and can be viewed as the replacement for Kraken’s Quest. The updated slide features a unique tunnel on the first half of the ride where sky-light rings create a thrill unlike anything found at a Florida water park.

Jim DeBerry, Senior Manager, North America for Arihant Water Park Attractions, the manufacturer of the new slide, explains this unique feature of the ride, “The natural light from the Florida sun will beam onto the enclosed slide tunnels for light effects of translucent colored rings with special pattern effects that leave the rider with the impression they are going through a high-speed time warp tunnel. Upon exiting the enclosed slide tunnels, the riders will enter an open straightway for an exciting race to the finish.”

The new slides are just the latest in a long list of updates the small water park and family entertainment center has received since new owners purchased it in 2015. Other updates have included improvements to the miniature golf course (which was also damaged by Irma), a new indoor ropes course, an expanded arcade, and a new go-kart track. The new owners, United Parks, also has added a number of special events including weekly “dive-in” movies at the wave pool and special family nights with discounted water park admission rates.

Both of the new rides are now being constructed and should open within the next few weeks.