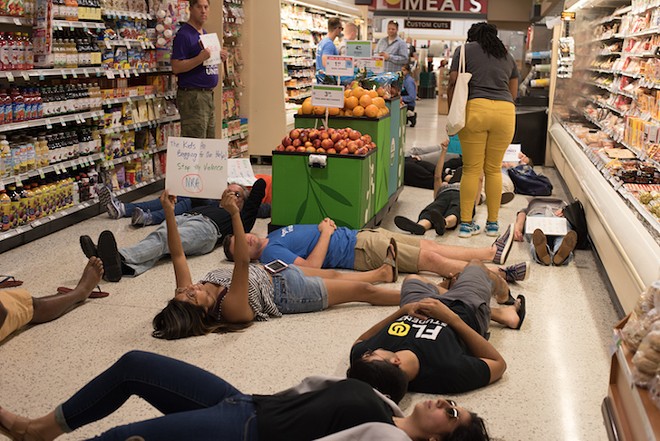 Coconut Creek police officer Brian Valenti is experiencing backlash and potential dismissal after sharing a comment on a Facebook post about the "die-in" protests at Publix locations last week.

According to the Sun Sentinel, the 45-year-old cop posted "hope some old lady looses control in that lot," under a photo of David Hogg in a parking lot of a Cocoa Creek Publix protest last Friday.

Hogg and other protesters drew 17 bodies in chalk throughout the parking lot to symbolize the 17 victims of his high school's shooting.

Although Valenti deleted his post, a woman took a screenshot of the comment and sent it to the Coconut Creek commissioners and Police Chief Butch Arenal with a message asking there be repercussions for the officer's comment.

“Whether someone agrees with these students or not, it is in very poor taste for a police officer to make the following comment regarding students that have just been through a tragic shooting,” said another commenter to the Sentinel.

Rod Skirvin, a recently retired Coconut Creek officer and union leader, said Valenti is "distraught" over the incident and that disciplinary action will be taken.

David Hogg, a outspoken critic of the NRA and a Parkland school shooting survivor, encouraged protesters to show up to their local Publix on Friday, May 25, to lie on the floor for 12 minutes at 4 p.m. An Orlando protest took place at the Publix located at Colonial and Shine.

Hogg also called on Publix to donate $1 million to the Stoneman Douglas Victims Fund, which is about double the amount of money the company granted Adam Putnam, self-proclaimed "NRA sellout."