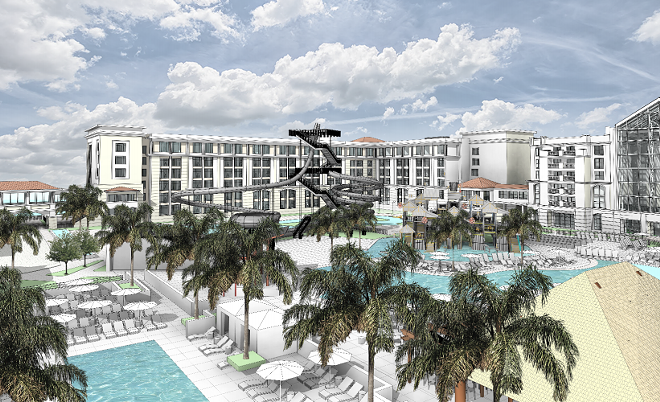 Gaylord Palms, already one of the largest resorts in Central just announced a massive $150 million expansion that will impact nearly every aspect of the resort.

A new wing of the hotel will add 303 guest rooms to the resort’s current 1,416 rooms. Renderings released with the press releases show a multi-story addition to the resort’s northern end, where the Everglades section is currently located.

The resort’s pool area, which saw its own $4.2 million expansion just two years ago with the addition of multiple slides and a surf simulator, will now have a lazy river and an outdoor events lawn.

Gaylord Palms owner Ryman Hospitality has been focused on enhancing their resorts' water areas in recent years, most notably at their Opryland hotel, where they’re preparing to open a $90 million indoor-outdoor water park later this summer.

The 400,000-square-foot convention center will receive its own huge update with a new ballroom, a multifunction meeting space and a carpeted pre-function space, each 30,000 square feet.

When finished, the 90,000-square-foot expansion will tie the Gaylord Palms convention center with the Rosen Shingle Creek in size, but both are still dwarfed by the 7 million-square-foot Orange County Convention Center. In a statement announcing the expansion, Gaylord Palms officials confirmed that the new convention space is designed to meet the needs of larger groups. A new multi-story parking structure will also be built. 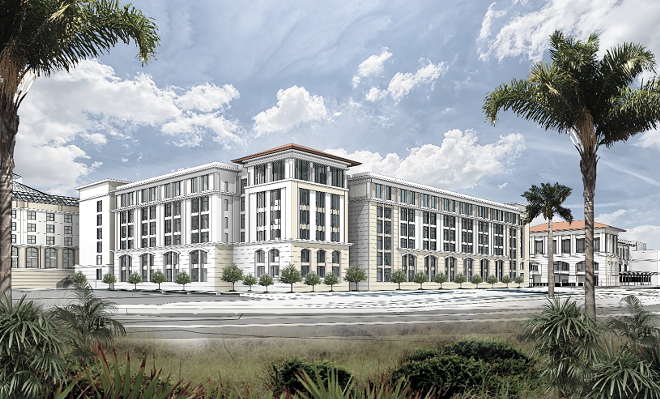 Ryman Hospitality also used the expansion as a chance to update its Restated Marketing Agreement with Osceola County. The updated agreement allows Gaylord to keep 85 percent of the first four cents from the six-cents-per-dollar tourist development tax the county collects on rooms at the hotel. The updated agreement allows the hotel to add an additional 1 percent tax to the rooms for 30 years to help pay for the expansion. That tax will begin in July of this year. The agreement means Ryman will save $49.6 million. Once that number is achieved, the agreement will expire. That’s expected to happen by 2032. As per the agreement, the county will not make any cash contributions to Ryman.

Much of the agreement between Gaylord Palms and Osceola County dates back to the county’s failed plans prior to the resort’s opening in 2002 when Osceola County was attempting to build its own convention center to compete with Orange County's. Those plans ultimately never materialized, thanks in part to a lengthy court battle between the county and the state, where the state contended that the use of tourist development taxes couldn’t be used to build the convention center. Ultimately the Florida Supreme Court ruled in favor of the county. After that court battle, the county was ready to move forward with a private developer for the publicly owned convention center, but that agreement came to an abrupt end in 2002 when fears of the developer’s links to an international terrorist group arose, though, for the record, those links were never confirmed. The convention center at Gaylord Palms, just next door to where the county had initially planned its own convention center, and a second at the Omni Resort in ChampionsGate now serve the role that the county’s original convention center was conceived to do.

Speaking on the agreement with Osceola County, Colin Reed, chairman and chief executive officer of Ryman Hospitality Properties, said, “We are proud of our long-standing partnership with the leadership of Osceola County, which has given our Company the confidence to continue our investment in this market. We would like to thank the Osceola County Board of County Commissioners for their support of this expansion, and we look forward to seeing this project take shape in the years ahead.”

Construction on the expansion will begin later this year, with the parking structure being built first. The entire expansion should be finished by the spring of 2021.