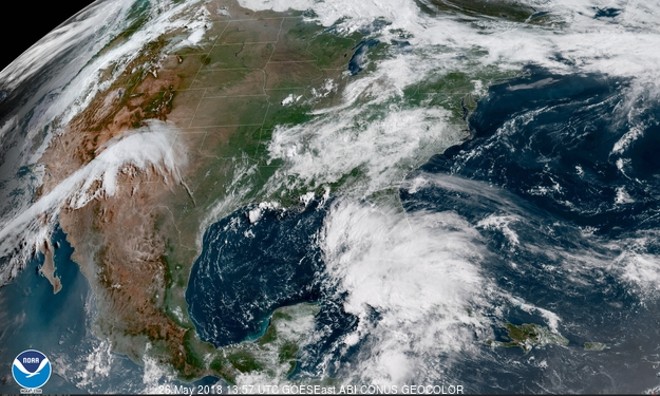 As winds and rains let up from Subtropical Storm Alberto, Florida officials Tuesday were quickly spinning ways to draw tourists to areas that may have missed out on Memorial Day crowds.

State Chief Financial Officer Jimmy Patronis and Gov. Rick Scott, during an appearance at the Walton County Emergency Operations Center in DeFuniak Springs, expressed a need for Visit Florida, the state’s public-private tourism arm, to emulate post-Hurricane Irma promotional efforts for the Panhandle and other parts of the state.

“This weekend should have really been the second busiest weekend of the whole year,” said Patronis, whose family runs Capt. Anderson's Restaurant in Panama City. “We, the restaurant, we did 40 percent of what we should have done.”

Scott said he would call Visit Florida President and CEO Ken Lawson. But before the half-hour appearance at the emergency operations center was complete, Lawson called Patronis, who handed the phone to Scott.

“The Legislature gave us $76 million again this year (for Visit Florida), and part of that money is to work on when we have something like this, to let people know we’re back open for business,” Scott told reporters after the appearance. “A lot of people are very dependent on tourism here. And a lot of people are getting paid just based on how many tourists show that day. They’re tied to tips and things like that. So, we have to get the tourists back.”

Stephen Lawson, a spokesman for Visit Florida who is unrelated to Ken Lawson, said even though there was little on social media from Florida travelers about Alberto, steps are being taken “in an abundance of caution” to show locations across the Panhandle remain unfazed by the storm.

“We'll be spotlighting the Panhandle across our social channels later this week to show that they are 100 percent open for business,” Lawson said.

A Facebook live event will also be held from Sandestin later in the week.

The promotional effort won’t require a special ad campaign similar to the $5 million spent to highlight the Florida Keys after Irma.

Few roads were impacted by flooding, with Panhandle officials telling Scott that almost all roads, bridges and beaches were open Tuesday morning. Officials were waiting to see total amounts of rain that Alberto dumps into rivers in Alabama.

The storm also appeared to cause relatively few power outages.

At 3 p.m. Monday, 9,861 electricity customer accounts in the state were without power, according to the Florida State Emergency Response Team. That total indicates 99.91 percent of all power customers had electricity.

Scott noted that since Hurricane Hermine hit the Big Bend, including Tallahassee, in August 2016, utilities have done a better job working together to restore power outages.