In less than a week, two prominent Florida Republicans have openly questioned why you can't refer to black people as apes.

Smith's now removed Facebook post defended Roseanne's tweet, which said, "Muslim brotherhood & planet of the apes had a baby=vj" referring to Jarrett, by saying  "And the issue with Roseanne is? along with a picture of Jarret alongside a Planet of the Apes character.

Smith, like Roseanne, posted an apology saying he was sorry and he just thought the post was funny, adding that he didn't know the former Obama advisor was black and that he simply thought she was a darker skinned Caucasian of Iranian decent.

Smith also stated that his post is "no more bigoted or racist" than when comedians like Wanda Sykes and Jimmy Kimmel refer to Trump as an orange orangutan, which conveniently ignores the country's long and dark history of referring to African Americans as monkeys.

"My knowledge of Valerie Jarrett, as a black woman, was only understood yesterday. My understanding was that she was of Iranian descent, a darker than average Caucasian, much like myself. Had no idea of her ancestry," Smith argued in his post. "Once again, such does not excuse my juvenile attempt at humor, but acknowledging the obvious similarities in appearance makes one no more bigoted or racist than champions of the left, like Jimmy Kimmel, Bill Maher or Wanda Sykes and others who characterize our President as an orangutans."

Unable to walk away from his Facebook account, Smith posted a follow-up this morning, arguing that people are only mad about his racist joke because the local media, which he now refers to as the "arbiters of PC," are trying to destroy GOP candidate Anthony Sabatini running for Florida House Seat 35, who also "liked" his post.

"The real reason this became 'news' was not because of the reissuance of a 'dumb' joke by yours truly and the fact that I'm Lake's GOP State committeeman. That will be why the DC says it was and the people at Associated Press, WFTV and FOX35 would've said the same if I would've granted them an interview, however their true objective was to attempt to destroy GOP candidate Anthony Sabatini running for House Seat 35," said Smith in his post.

Conspiracy theories aside, Smith's feed is pretty much a choose-your-own adventure of racism. Here's a post where he suggests we ban Muslims because a public space somewhere in a Muslim country has a sign banning dogs, a policy not unlike most of Florida's public beaches. 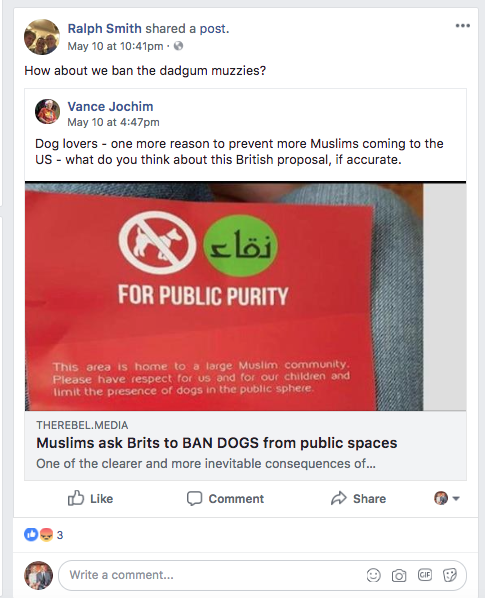 And here's another where Smith perpetuates the false and remarkably racist birther conspiracy theory.

But not be outdone with racism, Smith's Facebook feed also features some good ole fashioned sexism, as well. Here's a gem where Smith argues that former Fox host and Trump critic Megyn Kelly can't argue that women shouldn't be considered sex objects, because she once posed provocatively for something completely unrelated.

The sad thing is, Smith's comments aren't an isolated thing among Florida GOP members. In a figurative double rainbow of racism, yesterday former former lawmaker and Marco Rubio volunteer Susan Goldstein also referred to Obama as a monkey in a Facebook post, and, like Smith, tried to argue that it's somehow not racist at all to call a black person an ape.

Goldstein actually made the exact same argument as Smith, arguing that if Wanda Sykes can do it, why can't she?

"I believe there is a double standard," said Goldstein to the Miami New Times. "All I was trying to say is that I don't get why this 'comedian excuse' works for some and not others. I saw Wanda Sykes compare Donald Trump to an orangutan. Didn’t we all evolve from apes? Isn’t that what the evolutionists agree that we all evolved from? So I don’t understand why it’s OK for a comparison to be made to an ape for white people but not blacks."

Clearly, both of these Republicans skipped the history lesson on slaveholders, white supremacists, Nazis, etc., and are justifying bigotry by referring to black people as non-human apes, a dehumanizing label white people have never had to carry.

For future reference, here's some recommend reading for both, in the strong likelihood they attempt more jokes without punchlines.