Last fall, Orlando’s famed Pirates Dinner Adventure had its roof torn off during Hurricane Irma, causing the 22-year-old dinner theater attraction to close for extensive repairs. More than 200 employees were let go as the attraction struggled to recover.

By March, the attraction was readying to reopen, but then on April a two-alarm fire ripped through the roof of the building. Two construction workers attempted to put out the fast-moving fire but eventually, more than 15 percent of the roof structure, which had just been reinstalled, was damaged. The dinner theater had to once again push back its reopening and work to repair more than $200,000 in new damage. 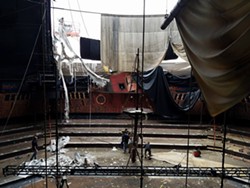 Luckily, the 46-foot-long replica 18th-century Spanish Galleon pirate ship where the majority of the show is focused wasn’t damaged by either incident, though it was subject to the elements for weeks after Irma tore off the roof.

The remodel gave Pirates a chance to update their show and improve their offerings. They added larger seats, cutting nearly 100 seats out of the main venue. They also wrote an entirely new show which will have even more cast members than the previous ones.

Now, after two major setbacks in what seems like a bad Bob’s Burgers joke, the dinner theater is preparing for its grand reopening on July 4.

Multiple job fairs are planned throughout June, and the dinner theater hopes to rehire many of those it was forced to let go after Hurricane Irma.

Currently, tickets are only available for the main dinner show. The two other shows, the adult-oriented Treasure Tavern experience the circus-themed, clown-heavy Cirque Magique show, have yet to announce when or if they’ll reopen. All three shows have proven to be popular with visitors and locals alike, with all three scoring ratings on Facebook of at least 4 out of 5 stars with The Cirque Magique having a nearly perfect score of 4.9.

Tickets for the new Pirates Dinner Adventure show begin at $35.95 for children ages 3 to 10 with adult tickets starting at $61.95. Tickets for July shows are on sale now.