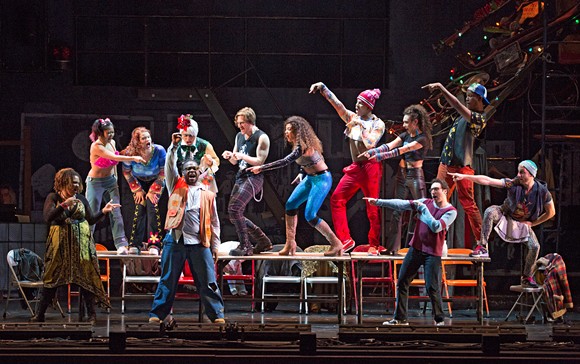 A little over 20 years ago, I saw the original Broadway production of Rent, and was bowled over by its explosive energy and contemporary subject matter. Over the decades since, I’ve experienced countless touring companies and community theater productions of Rent, mostly with diminishing returns. So I was hoping for the newest national tour – which launched in 2016 to celebrate the show’s 20th anniversary – to breathe some fresh life into the late Jonathan Larson’s tribute to La Boheme.

Unfortunately, despite solid production values and an eager young cast, this Rent: 20th Anniversary Tour demonstrates how swiftly the play has progressed from present-day to period piece. Unlike recent anniversary revivals of Phantom of the Opera and Les Miserables, Rent passed up on the opportunity to reimagine the show for a new generation. Instead, director Evan Ensign slavishly re-creates Michael Grief’s original staging atop a reproduction of Paul Clay’s junk-strewn set; even Angela Wendt’s costumes are near-clones of her New York designs. The script and score are also unchanged, complete with dated references to now-evicted hipster touchstones like CBGB’s and the Village Voice.


As a result, it’s impossible not to compare these performers to the famous faces in whose shoes they are literally walking. It is refreshing to see these roles played by people who aren’t 15 years overage, but while they give it the old college try, these undergraduate-aged actors are adequate at best. As Roger Davis, the AIDS- and angst-ridden guitarist, Logan Farine uncomfortably twitches his way through a caricatured Adam Pascal impression, while Logan Marks underplays nebbishy filmmaker Mark Cohen to the edge of somnambulism, so these supposed best buddies evidence no bromance. Similarly, Deri’andra Tucker’s shaved head lends her Mimi a feral intensity, but she generates fewer sparks with Farine than with her uncooperative candle.

The relationships are stronger between secondary characters Tom Collins and Angel (DevinRe Adams and Javon King), and Maureen and Joanne (Lyndie Moe and Lencia Kebede), and the enthusiastic chorus helps propel the first act. However, the dark, choppy second half held little emotional resonance for me this time around, with the infamous ending feeling like more of a cheat than ever. In fact, the only character I found myself identifying with is the nominal bad guy Benny (Marcus John), who just wants a neighborhood where people don’t piss on the stoop.

If nothing else, it’s always lovely to hear “Seasons of Love” sung live, even after the 525,600th time. But I can’t see this tour converting many new fans to the bohemian brigade. And those who’ve followed Rent since the start may find this stroll down memory lane only reminds them that you can’t go home again.