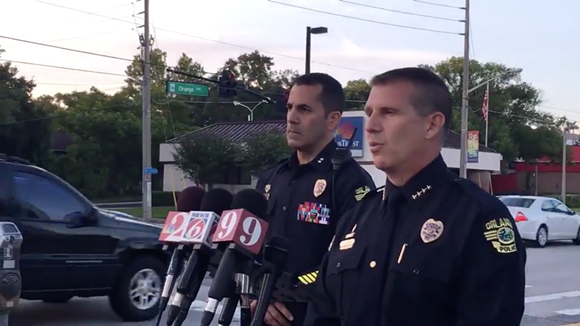 An Orlando man is holding four children hostage after shooting an officer during a domestic violence call at an apartment complex near Universal Orlando, law enforcement officials say.

Orlando Police Chief John Mina says the officer who was shot sustained a "very serious and significant injury," but he is expected to survive.

Officers were responding to a domestic dispute at Westbrook Apartments on Eaglesmere Drive around 11:45 p.m. Sunday after a woman reported her boyfriend had battered her. When officers went to arrest the boyfriend, Mina says there was "an exchange of gunfire" and one officer was shot.

Mina says the suspect is currently barricaded in his apartment holding hostage four children ages 1, 6, 10 and 11. A SWAT team is trying to negotiate with the suspect for a peaceful surrender.

"Our main concern right now is the safety of the children that are in that apartment," Mina says.

We would welcome your prayers for our officer, who sustained a very serious injury, and for his loved ones and his OPD family. pic.twitter.com/Mlv5GW50My


UPDATE: At 3 p.m., Orlando Police Chief John Mina said officers are still trying to negotiate with the man holding four children hostage inside an apartment after shooting an officer.

Mina identified the man as Gary Wayne Lindsey Jr., 35. The four children are ages 1, 6, 10 and 11 years old, according to an update from OPD.

The stand-off between Lindsey and law enforcement has lasted for more than 12 hours, Mina said.

"We are urging him to release the children," Mina said. Mina added that Officer Kevin Valencia, who police say was shot by Lindsey, underwent surgery at Orlando Regional Medical Center and remains in critical condition.