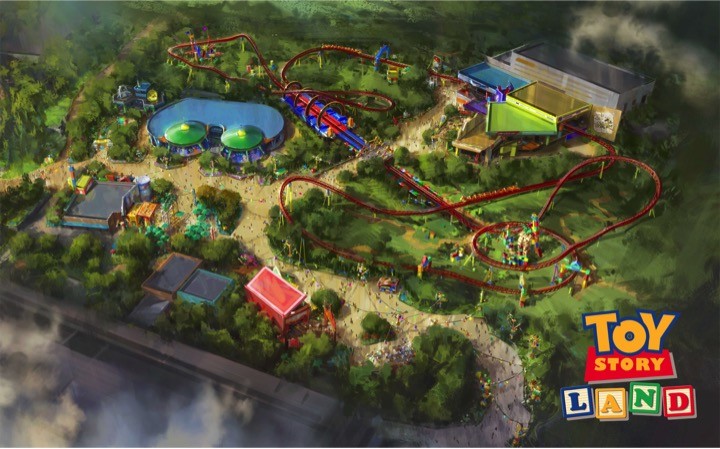 This year’s new offerings at Florida theme parks may seem a bit lackluster, but there’s still plenty of new things to experience.

By far the biggest addition this year will be the new Toy Story Land at Disney’s Hollywood Studios. The new land will feature two new rides, a new quick-service window dining option, and a new entrance for Toy Story Mania. A family-friendly launch roller coaster, similar in thrills to Magic Kingdom’s Seven Dwarfs Mine Train, will be themed to Slinky Dog. The other new ride is Disney’s updated version of the boardwalk classic whip ride. A similar ride, themed to Tow Mater, opened at Disney California Adventure in 2012. The one here will be themed to Little Green Men aliens. Guests will sit in cars ‘pulled’ by the aliens in a double-8 figure with each turn causing the ride vehicles to fishtail.

A walk-up quick service restaurant, new restrooms, and plenty of larger than life Toy Story props fill out the new land which will open on June 30.

With two new attractions, Universal Studios Florida, tied Hollywood Studios with the most attractions opening this year, though neither of them looks to impress.

Up first is Universal Studios Florida's new Fast & Furious - Supercharged. When this ride opened last month, it was almost universally (no pun intended) panned. Universal Creative kept its streak going with another incredible queue, this one feature two pre-shows, each with its own live host. The queue also includes numerous cars from the popular film series and tons of Easter eggs. The ride replaced the Disaster! attraction, which was a mostly cosmetic update to the opening day Earthquake attraction. Gone are the physical sets, the exploding truck, and the collapsing roof, now all replaced with screens and graphics that look straight out of Grand Theft Auto. The ride is a fun family attraction but, as many have pointed out, it seems like a major missed opportunity considering how popular the Fast and Furious franchise is. Still, this attraction is a great distraction as guests run between more popular rides, like Transformers and Mummy, and Diagon Alley.

The second new attraction at Universal Studios Florida will be the new nighttime fountain-based show that will open later this year on the park’s central lagoon. Earlier this month in what appears to be an accidental leak the park’s website listed details on the upcoming show. Within hours of going live, the site had removed the details for the show, which it was “Universal's Cinematic Celebration – Epic Cinema Under The Stars.” The quickly removed blog post also confirmed that the new show would feature scenes featuring Jurassic World, Fast and the Furious, and Minions via large water screens. The posting also promised “scores of dancing fountains.” No timeline on its opening has been announced though current construction points to a mid-summer opening.

Water rides seem to be a big focus this year with four of this year’s attractions being water based.

At SeaWorld Orlando construction is wrapping up on its new offering; the much-anticipated Infinity Falls. The family round-raft ride will feature a four-story drop, the world’s tallest for this type of water ride. Being built in front of the former Hospitality House, the new ride will also include a brand new themed area for the park. Themed to the Amazonian rainforest the new land will be one of the first for SeaWorld not directly tied to the seas. With other recent, including Antarctica: Empire of the Penguin and Mako, not being nearly the draw that investors had hoped for all eyes on this new attraction. The non-sea theme can also be viewed as a test for SeaWorld which plans another non-sea themed area next year when it opens the Sesame Street area currently under construction in the former Shamu’s Happy Harbor.

Just across the street from Infinity Falls at SeaWorld’s water park Aquatica a new family raft flume ride, Ray Rush, opened earlier this year. After opening Ihu’s Breakaway Falls in 2014, the water park hasn't added anything in recent years. Ray Rush replaces Hooroo Run, a Bubba Tub style ride with only one main thrill thanks to its drops. The new flume features an accelerated water jet launch, then a mix of twisting tubes, a 360-degree sphere, and a pendulum style drop towards the end of the ride. The jet launch and the 360-degree sphere have never been featured on a similar round raft water flume ride in Florida before.

Just up the street from the SeaWorld parks at ICON Orlando 360 (formerly I-Drive 360) the brand new StarFlyer Orlando opened on the first of this month. Topping out at 450-feet tall the new ride is the tallest StarFlyer in the world. With speeds of over 60 miles per hour and ride vehicles that reach heights above the nearby ICON Orlando observation wheel (formerly the Orlando Eye) this swing ride is much more thrilling than the typical swing attraction. This is by far the most thrilling of this year’s new attractions and is the only one that isn’t safe for the majority of the family.

In Tampa Busch Gardens sat this year out but next door at Adventure Island a new 70-foot tall drop ride, very similar to Ihu’s Breakaway Falls at Aquatica Orlando, opened with the season. Vanish Point used the pre-existing Colossal Curl ride tower and like Ihu’s offers both a floor-drop option and a push-off option. Two floor-drop capsules, each with its own thrilling flume path provide the most thrills while the push-off slide gives guests a calmer, though noted faster, ride option. This is the first new ride at the park since Colossal Curl opened in 2015.

Altogether 2018 is mostly a quiet year with all of the major local parks more focused on new additions, both announced and unannounced, that should start opening beginning next year. In the meantime, from fountains to a roller coaster to swinging amongst the clouds to flume rides, this year looks to be one with plenty of new ways to cool off.