There are already a half-dozen major hotel projects in the works at Walt Disney World, but four more were just added to the list.

Nestled on the western edge of WDW Flamingo Crossings is a mixed-use development that has been in the works for over a decade, but only within the last 12 months has it really come alive. 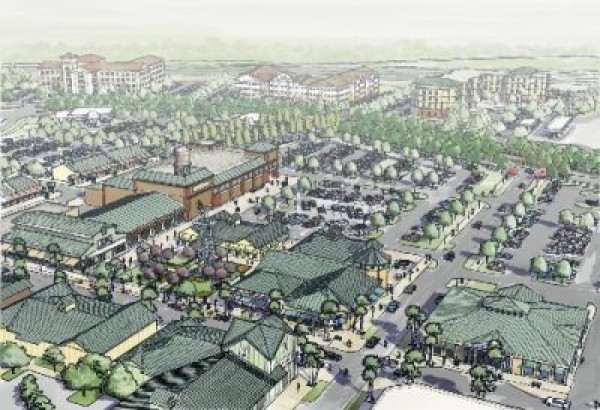 Two hotels, a SpringHill Suites and a TownePlace Suites, did finally open in early 2016 but since then the development hasn’t seen much activity. Since Disney’s senior real estate manager Henry Thrash first confirmed in 2017 that the development was still in the works and about to be kicked into high gear, the area has seen a flurry of new permits: 2,600 apartment units are in the works for primary use by the Disney College Program, but most of the focus in this area will be on capturing budget travelers. The location along Toll Road 429 is close to the ESPN Wide World of Sports, but will put thousands of guests closer to Disney parks and further away from .

This week, plans for four more hotels were confirmed via new water management district permits (Permit No. 48-00714-P). The hotels along the northern edge of the development were already confirmed thanks to previously published documents showing plans for the area, but the new permits give us a more updated look at what is coming.

Like the other hotels in Flamingo Crossings, and similar to how Disney also developed the Hotel Boulevard area near Disney Springs, the new hotels are being built and owned by a third party, though Disney remains highly involved in all aspects of the development. The hotel project is being developed with a partnership between Huntsville, Alabama-based Yedla Management Company and Doradus Partners.

According to their website, Yedla currently operates 10 hotels across the southeast including the Westin Lake Mary, Orlando North. Another four hotels are listed on their website as "coming soon," including a Charlotte hotel that will be the company’s first Home2 Suites. None of the Flamingo Crossings hotels are mentioned on Yedla’s site, but each has its own section on the Doradus Partners site. Yedla also developed and managed the Springhill Suites and TownePlace Suites found in Flamingo Crossings. Those were developed in a partnership with Alaska based JL Properties, who still owns a third pad just north of the two current hotels.

Three of the four hotels are within the Hilton family of brands, while the Residence Inn is Marriott. None of the new hotels are Hyatt flags. Also new is the focus on suites. While Hyatt House and Home2 Suites do offer similar amenities, the shift from Hyatt Place to Homewood Suites points to a desire to capture those larger groups that will be more appreciative of the larger rooms. The focus on suites isn’t a surprise since sports teams who are heading to tournaments at the ESPN WWOS or other nearby sports complexes are a primary target for the development. 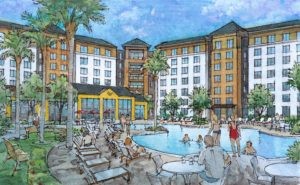 Home2 Suites and Homewood Suites will share a 484-space parking structure, zero-entry pool with a water slide, and winding sidewalks that connect the two hotels. A surface parking lot separates the Homewood Suites from the Fairfield Inn. The back of the Fairfield Inn has a second pool overlooking an untouched forested area and a retention pond that’s just over an acre in size. A stand-alone building just north of the pool looks to be a small pool bar. On the opposite side of the retention pond is the Residence Inn, with the most formal pool of the three. This pool also features a large pool deck area overlooking the retention pond.

The documents show 4,153 square feet of convention space, though specifics on how the square footage will be split amongst the four hotels have yet to be announced.

With these four new hotels, six of the seven hotels initially announced for Flamingo Crossings will be realized but early site plans which are still active point to another street on the eastern side of 429 that will eventually hold another seven hotels with more possible on the southern end of the project No details on that phase of Flamingo Crossings has been shared since Disney first announced the project.

While no opening date has been announced if a similar timeline as the two other hotels at Flamingo Crossings are any indication the four hotels currently in the works should open by the end of next year; just in time for the massive crowds expected for Star Wars Land at Hollywood Studios.