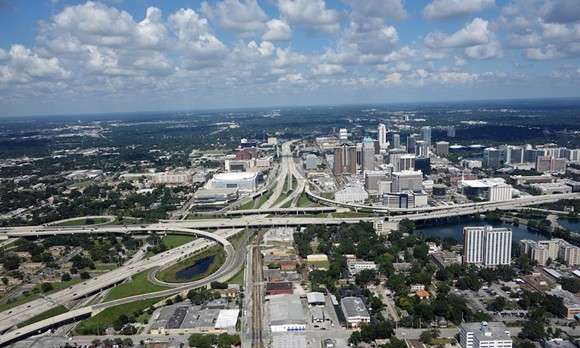 An Orlando public housing complex that suffered from a long history of awful segregationist policies will soon be torn down.

Over the years Griffin Park has had an array of issues, including mold, rats and air pollution, but most notably the complex could be considered a victim of the City or Orlando's early segregation policies.

The neighborhood is completely surrounded by State Road 408 and Interstate 4. Both highways see hundreds of thousands of cars each day. For years, residents have been complaining of health issues at Griffin Park, and this issue came to light in a damning report from Huffpost earlier this year.


This was not an unintended consequence; this was the whole point. As highway lobbyist Alfred Johnson later told an interviewer, some city officials in the mid-1950s were blunt about the goals of highway planning: “Urban Interstates would give them a good opportunity to get rid of the local ‘niggertown.’” ... Today, I-4, State Road 408 and various ramps form the loop that encapsulates Griffin Park within an “oval of pollution,” said Robert Cassanello, a history professor at the University of Central Florida. “The developments, and the plans to revitalize the city, were at the cost and risk of African-American residents.”


The health issues were widespread. Children and elderly residents were forced to wear face masks regularly to help protect themselves from respiratory infections due to the noxious air and soot. In addition to the airborne pollutants, infestations of termites and rats were also found at the complex.

The demolishment of the complex is only in the early stages. It will take years to move residents out and finally start bulldozing.

No plans have been stated for where current residents will reside when they have officially evacuated the area.