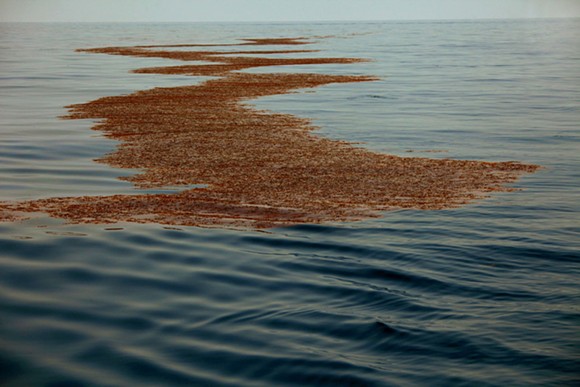 On behalf of three environmental groups, Earthjustice filed a lawsuit against the Trump administration Thursday for failing to protect threatened species in the Gulf of Mexico as it pushes to expand drilling amid regulatory softening.

According to Earthjustice, the administration has yet to complete "a legally required consultation about offshore drilling's harms to threatened and endangered species," including whales, sea turtles and other marine life.
The consultation consists of a study of hazards to wildlife from drilling following the 2010 explosion of BP's Deepwater Horizon oil rig, which left 11 workers dead and dumped approximately three million barrels of oil into the Gulf, killing or injuring thousands of wildlife in the process.

"For over 10 years, the federal agencies that are responsible for the protection of threatened and endangered species in the Gulf of Mexico have been sitting on their hands," Cynthia Sarthou, executive director of Gulf Restoration Projects, tells Earthjustice. "As we saw in the BP disaster, the harm caused by the oil and gas industry wreaks havocs on our Gulf. It's time for these agencies to do their job and comply with the law."

The buck wasn't meant to stop with the Trump administration, though. After the 2010 spill, the Obama administration agreed to take a closer look at impact from drilling, but then failed to complete a study by 2013, forcing environmentalists to sue. Wildlife officials then agreed to have the study completed by 2015, though it never came to fruition.

However, earlier this year, when Interior Secretary Ryan Zinke announced the Trump administration's plan to unravel regulations to expand the oil industry's coastal drilling, efforts to counter the plans were reignited. By that time, Zinke had begun backpedaling on the idea after a (pseudo) meeting with Gov. Rick Scott, which was as much a political stunt as it was folly.

Earthjustice is representing the Center for Biological Diversity, the Sierra Club and the Gulf Restoration Network. The lawsuit asks the court to order the National Marine Fisheries Service and U.S. Fish and Wildlife Service to finally complete a study. The organization has three months to do so.

"The Gulf has been treated as a sacrifice zone for corporate polluters for far too long," Athan Manual, director of the Sierra Club's Lands Protection Programs, tells Earthjustice. "We will not allow the Trump administration to ignore serious threats to coastal ecosystems in their reckless quest to sell off America's waters to the fossil fuel industry for offshore drilling."