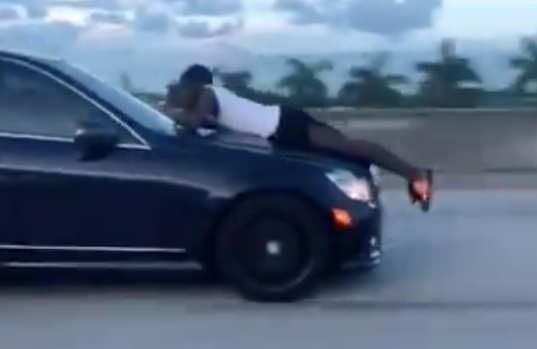 Last weekend, a Florida man was spotted on I-95 riding on the hood of a car at high speeds.

Twitter user @danimidah posted a video of the incident to Twitter Sunday evening, showing the unidentified man gripping the hood of the car while going upwards of 69 mph. Nice.

"What the actual fuck? he says in the clip. "There's a bitch inside, bro. I think they're talking to each other. Bro, she's definitely pissed."

Not much is known about the incident, other the guy is wearing inadequate footwear for such a stunt, and that it occurred in Miami between Hollywood and Aventura.

This actually is the second extremely stupid thing to be filmed on Florida's stretch of I-95 this month. A couple weeks ago a man was spotted riding his bike on the highway during rush hour traffic.

When she says she’s done with you but you’re not really done with her #onlyinflorida pic.twitter.com/4vt34VMhN6