Sometimes, Erie Salgado would like to cry for days out of sheer frustration.

Almost a year ago, his family lost their home and all their possessions in Puerto Rico to floods caused by Hurricane María. Like tens of thousands of other Puerto Ricans, Salgado, his wife Bethzaida Crespo, and their two children fled the island to seek shelter in Central Florida. For months, they have lived cramped in a small hotel room at the Holiday Inn in Kissimmee paid for with FEMA's hotel voucher program, cooking meals with a microwave and small appliances.

Salgado, 40, has found several jobs in painting and construction, but he says he's also been a victim of wage theft because he doesn't speak English well – one former employer owes him nearly $1,000. Meanwhile, Crespo has dedicated her time to finding them a place to live without success. The lists for public housing are two years long, nearby apartments aren't affordable or available, and even other extended-stay motels are out of their price range at $1,450 a month.

"It's not easy," Salgado says in Spanish. "People think we want to live off the government. I don't like that. I want to keep pushing forward to support my family. At times, I want to cry and cry, and not stop. But I have to be strong for them."

The latest blow for Salgado's family came after FEMA announced it was ending hotel vouchers, also known as the Transitional Shelter Assistance program, for about 1,200 displaced Puerto Rican households on June 30. The federal agency offered people free planet tickets back to the island, though only 188 families signed up to leave as of last Thursday, according to FEMA.

With nowhere to go, Salgado and Crespo packed their things into suitcases and lined them up against the wall. On Saturday night, hours before they were set to check out on Sunday, the family got a last-minute reprieve.

A federal judge in Massachusetts temporarily blocked FEMA from cutting housing aid for Puerto Rican evacuees after a lawsuit was filed by the civil rights group LatinoJustice PRLDEF. To comply with a court order before a hearing on Monday, FEMA gave displaced Puerto Rican families until July 5 to remain on the TSA program. FEMA would not comment about pending litigation, but in a statement, the agency said it would also extend a program offering Puerto Rican families free plane tickets back to the island until Aug. 30.

Later that week, U.S. District Judge Timothy Hillman ordered FEMA to extend the aid until July 23 to give both parties time to prepare their arguments.

“I find that further briefing on the issues would be helpful to the Court,” Hillman wrote in his order. “I would like the parties to address the implication of the refusal of the Governor of Puerto Rico to request an extension of the TSA program benefits.”

FEMA would not comment about pending litigation, but in a statement, the agency said it would also extend a program offering Puerto Rican families free plane tickets back to the island until Aug. 30.

The lawsuit accuses FEMA of "arbitrarily, capriciously and unlawfully" deciding to cut off aid to the TSA program for Puerto Rican evacuees.

"What we're talking about here is not families that want a free stay – they're families that lost everything," says Kira Romero-Craft, managing attorney over LatinoJustice's Southeast office. "The majority of our working-class families got out of the hotels. The folks left behind are the most vulnerable: They're the ones that have very young children, that have sick, elderly folks, so those are the folks that we're looking to protect." 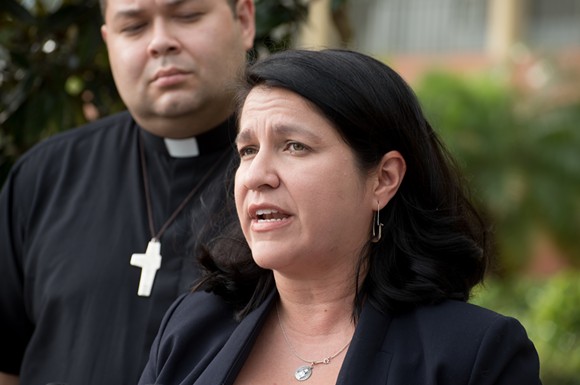 Romero-Craft points out that victims of hurricanes Katrina and Rita were provided TSA assistance for 26 months, while FEMA has paid nine months of hotel vouchers for María victims.

"We're not asking for anything different than what other families have received after natural disasters," she says. "We are asking for the same treatment. We want to remind everyone that these are U.S. citizens who deserve our protection and deserve our support during this difficult time."

Crespo was one of seven plaintiffs included in the lawsuit.

"We need to raise awareness of how this thing is going down – it's messed up," Crespo says. "You're telling me that we got hit by Irma and María and now we're getting thrown back to Puerto Rico, where it's unlivable right now. The lights went off for the whole island a few days ago, so how is it livable?"

On Sunday morning, U.S. Rep. Darren Soto was at the Super 8 motel off Highway 192. Soto said FEMA had not alerted hotel owners about the judge's order or the TSA extension in the morning, so many Puerto Rican families were being asked to leave. The congressman was contacting hotels and visiting displaced families to let them know about the new deadline.

"This will give us a few more days to hopefully get some of these families that have been more difficult to place a place to go," Soto says.

Father José Rodríguez says he also had trouble Sunday helping Puerto Rican evacuees who was staying at the Staybridge Suites near the Orlando International Airport.

"I was helping one of the families re-check in, and it was a hassle," he says. "They weren't nice about it. When I asked them if they would please call back the families who had already checked out and left, the manager told me she had no way of doing that, and then she wouldn't help me any further."

Rodríguez, who is part of the coalition Vamos4PR Action, says another family staying at the Mystic Dunes resort in Celebration called him panicking at 9 a.m. on Sunday.

"The hotel manager wouldn't let them stay, and at 10 a.m., they brought them trash bags to their rooms to tell them they had to go," he says."We talked to the manager and he finally said they could stay for a few hours until things got figured out."

Some families probably ended up on the streets, Rodríguez says, because neither they nor the hotels were alerted about the extension until late Sunday after evacuees check out.

"My fear is that some of them check out, check into a cheaper hotel and they're already spending what little money they have, that they can't afford to spend, to get their own hotel room," he says.

Desiree Torres had already packed her belongings in a corner of her Super 8 suite and booked a room at another hotel when she heard about the small extension from FEMA.

"I sent my kids back to Puerto Rico to stay with my mom for the summer because I didn't want them to deal with this," Torres says in Spanish.

Torres now earns $18 working at a construction job in the Blue Origin facility in Cape Canaveral. It's still difficult for the single mother to get an affordable apartment because she has to factor in other costs like daycare and gasoline fare. She's saved some money for a security deposit, but Torres is worried she'll have to spend it on hotel rooms after FEMA's latest extension ends.

"There are jobs here, but the problem is housing," she says. "Then there's the salaries at $8 per hour. Apartments are asking people to make three times the amount of rent in a month, plus two months worth of rent as a deposit."

Torres doesn't want to go back to Puerto Rico because she's already a life here – aside from a job, she has a car and the kids are enrolled in schools. FEMA gave her about $5,000 to fix her destroyed house in Puerto Rico – it was enough to pay for a roof and some of the internal structure, but the house remains without electricity.

"I don't want to go back because I suffered so much over there," she says. "I think FEMA believes we're not hustling, but honestly, I haven't stopped moving. I've been looking for a home for my kids, a job that pays better. I've been trying make something better for myself every day."