The disappearance and fallout of downtown Orlando's Blackstar venue

The rumors on the street are true. As we reported on June 28, the promising nightlife juggernaut that Blackstar set out to be is dead. That includes sister venue Odd Jobs.

Of all the music scene news in this historically busy year, the splashiest and most seismic by far was the transformation and rise of the Blackstar/Odd Jobs complex (and, though it has yet to fully materialize, the wider Firestone site). This downtown event space concentration was the biggest new potential force to rise in the city’s scene in ages. 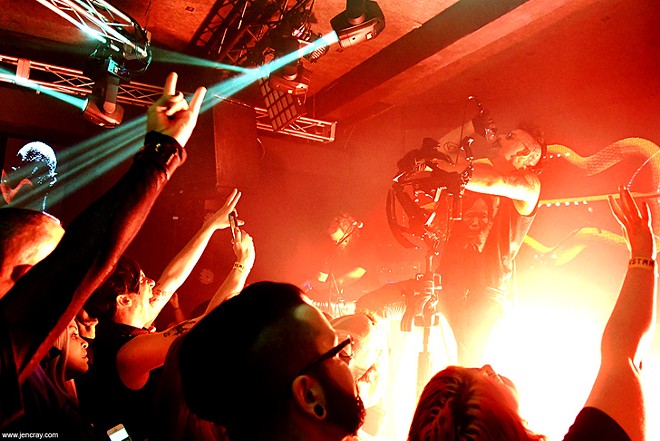 However, what launched early this year as a forward-minded vision housed in a complex of exceptionally outfitted facilities is already gone before it could ever really flex its wings. The club complex has been sold to new owners and there’s been no word yet on what their concept for it is. But it won’t be the one that everyone’s been watching intently since late last year.

There were already serious signs that a sea change was afoot prior to the sale. Most telltale was that the loaded and dynamic creative team assembled by credentialed, Orlando-based music biz pro Mike Feinberg to develop the Blackstar concept was essentially ousted by the ownership of the Firestone property, including Feinberg himself. The only one that remains as of this writing is Dan Larson, one of the team’s biggest booking forces with a résumé that includes Okeechobee Music Festival and the Dr. Phillips Center.

But, although it would’ve been great to see what this all-star cast could’ve done together, at least it looks like they’re all getting back to the productive ways that made each a notable scene-making force. Feinberg has always had his main gig in music management and development, which is full-time enough between Ho99o9 and FORM Arcosanti. And now that Hannah Fregger is freed up, Ugly Orange – the exceptional DIY promotions group she co-heads with Nicole Dvorak – is notably back up to the event speed they attained prior to Blackstar.

But look for some fresh waves coming soon from Tommy “Mot” Barger. The longtime scene-builder behind Spacebar and the Milk District is about to re-emerge himself with some new, boundary-breaking looks.


Beginning this month, he’ll be taking his long-running, underground-famous parties No One Knows I’m Disco and PANIC! and double down on the inclusive edge by bringing them to inject new blood into westside downtown bar and LGBTQ safe space Stonewall. They’ll both start out as alternating monthly events with NOKID debuting July 20 and PANIC! picking up August 17. What’s more, continuing his reputation as a champion and impresario for next-gen Orlando movers, Mot will be taking with him some of the young promoters and DJs he’s worked with at Spacebar and Blackstar and booking them at Stonewall.

But back to Blackstar. It’s worth remembering that Blackstar/Odd Jobs was supposed to be the first major step in a complete overhaul of the entire Firestone block. The next was a massive renovation of the historic Firestone nightclub to become a House of Blues-esque live venue named the Vanguard. That project is still moving forward. But seeing how Blackstar came and went, all stirrings on this property will continue to be ground zero for scene intrigue, albeit for some different reasons now.