A 32-year-old Tallahassee man was arrested in connection with a violent home invasion and sexual assault in Casselberry.

According to the Titusville Police Department, Benjamin Victor Hovan was arrested at a Marathon gas station on U.S. 1 just before noon on Wednesday, after an officer recognized the suspect and scanned his the license plate of his car, which came back as stolen.

When approached by the officer, Hovan then attempted to escape on foot but was quickly tased and taken into custody. Authorities say Hovan's car was a stolen Mercedes from a previous home invasion in the Miami area.

The suspect was wanted after Casselberry Police say he entered an apartment occupied by two women last weekend, sexually battered one of the victims and then kidnapped both of them by forcing them into their own car.

Hovan then reportedly drove the victims to a Publix in Maitland, where he ordered one to get money out of the ATM. However, one of the victims was able to signal to an employee to call the police, and the suspect drove off in the stolen vehicle, which was later found Tuesday abandoned in Maitland.

Casselberry Police were able to identify Hovan through DNA evidence.

Hovan will soon be extradited the Seminole County jail where he faces charges of sexual battery, kidnapping and home invasion. 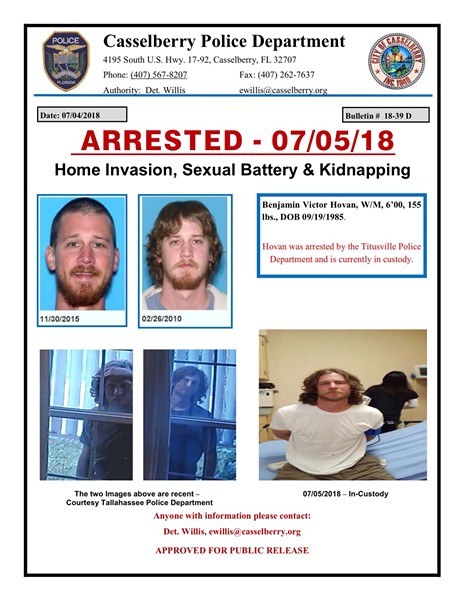