Florida cops: 'This may be the largest gator we've ever responded to' 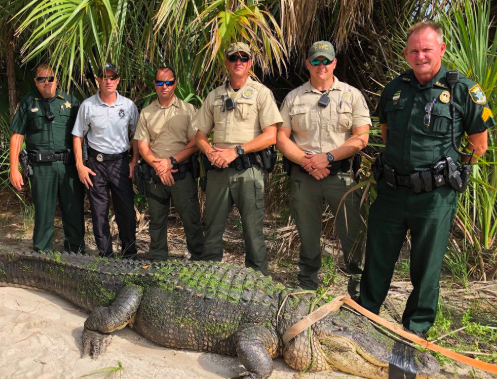 A massive 13-foot gator was caught at a park in Southwest Florida on Sunday by Florida Fish and Wildlife officers and sheriffs from the Sarasota County Sheriff's Office.

The gator was roaming around Shamrock Park in Venice near the Gulf of Mexico. Supervisor Carl Selitti said this may be the biggest gator their team has had to capture.

The team took to Twitter to share the experience and relief they felt after wrangling the beast:

.@MyFWC officers are relieved today after capturing this 13ft gator from Shamrock Park in Venice. According to our Animal Svcs Supervisor who has been with SCSO for 20 years, this may be the largest gator we’ve ever responded to. #PublicSafety #OnlyInFlorida #AllInADaysWork pic.twitter.com/AK0s8Z8004


The Florida Fish and Wildlife Conservation Commission is constantly reminding people to be on the lookout for these nuisance alligators, especially during mating season.

There have already been several violent attacks and other close calls around Florida involving large gators since the mating season began in May.