With Star Wars and Toy Story Land wrapping up, the focus at Disney is now fully on Marvel 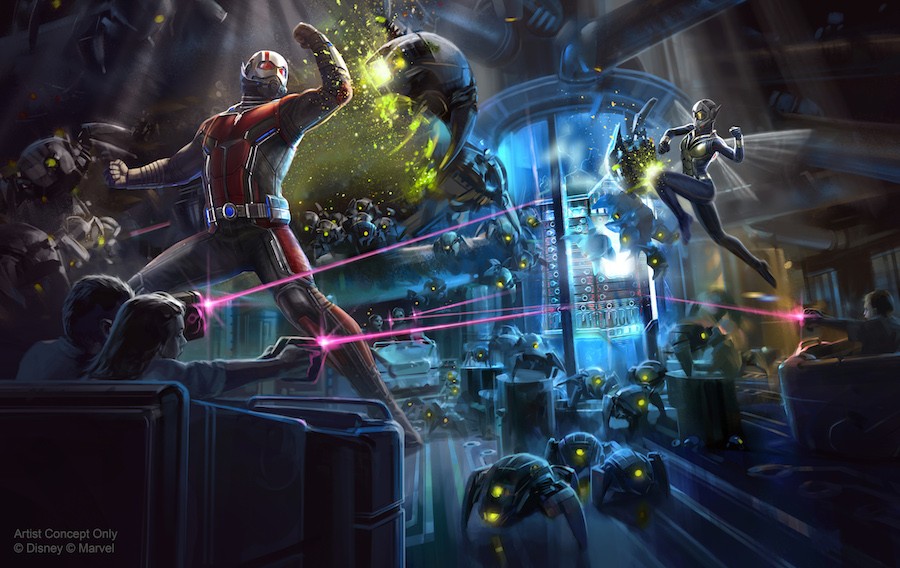 It’s been clear for some time that Disney is going all in with Marvel in the theme parks.

At this point, every single Disney Parks resort in the world has some type of Marvel presence either already open or under construction. But the one that we still know the least about is Anaheim, where Disney California Adventure is slated to get a huge Marvel land.

The Marvel presence in the park actually began with the Guardians of the Galaxy redo of Tower of Terror last year. When the new "Guardians of the Galaxy – Mission: Breakout" ride opened in early 2017, a small hatch was spotted in some bushes near the drop ride. In the center of the hatch was the Avengers logo fueling rumors of the plans to bring the superhero team to the park.

By March of this year, the plans for most of the international parks was clear with major new Marvel-themed lands announced for Hong Kong and Disney Studios Paris, a new Marvel-themed hotel for Paris, and even a Marvel attraction heading to Orlando.

At the same time that Disney announced the new Paris and Hong Kong lands, it also confirmed a similar land planned for Disney California Adventure. But unlike the international parks, very little was given on what to expect in Anaheim. Disney confirmed Avengers and Spider-Man both would have a presence in the new California based Marvel land.

In Hong Kong, the plans included a major Avengers ride with a massive multilevel facade that could practically double as its own mini-land.
With no solid plans announced, Disney abruptly closed California Adventure’s ‘It’s Tough To Be a Bug’ on March 19 to make way for the new land. Disney historian and noted insider, Jim Hill, was quick to point to the Hong Kong plans for what may be in the works in California.

It’s believed that the Hong Kong Avengers attraction, and that park’s recently opened Iron Man Experience (an updated version of the ‘Star Tours’ style ride system), will both make their way to California Adventure.

Hill explained in a recent tweet how this would work in California, where Buzz Lightyear is found in Disneyland and not California Adventure, stating that the “Anaheim version would reportedly repurpose the Buzz ride system by moving it over from Disneyland to DCA.”

This reuse could mean a much quicker construction timeline for the new attraction, which is good since one of the primary concerns in California is the Star Wars land opening next door in Disneyland. Recently on Twitter Hill gave details of Disney’s plan in preparing for the new larger crowds expected once Star Wars: Galaxy’s Edge opens next year.

“The real problem here is that current projections show that — due to overwhelming popularity among would-be theme park goers — "Star Wars: Galaxy's Edge" is going to cause Disneyland Park to close by 9 a.m. due to capacity-related issues at least 100 days out of the year. This is unacceptable from an operations point-of-view. As Disneyland Resort officials see it, the only way to bring balance to the Force is to make sure that DCA has rides, shows & attractions that are at least as compelling as those found in Batuu. This actually has a lot to do with the Paradise Pier / Pixar Pier redo project. With the idea being that if a lot of their Pixar pals were concentrated in one particular part of DCA, that might then make this theme park more appealing to families who have small kids. Conversely, if large sections of Hollywood Backlot were then filled with elaborate, effects-filled Marvel-themed rides, shows & attractions ... Well, that might then make spending a day at DCA when you can't get into Disneyland Park because "Star Wars: Galaxy's Edge" is still so super-popular a bit more tolerable.” Hill continued; “The real challenge starts a year from now when "Star”…”Wars: Galaxy's Edge" in Anaheim finally opens for business and the Disneyland Resort has to go through all of these growing pains of learning how to deal with that level of crowding every day during the Summer months, every other holiday and on most weekends. It won't be pretty.”


But with the Anaheim version on Star Wars land opening spring of next year (roughly six months before the expected opening of WDW’s), the Marvel additions designed to pull the crowds away from Disneyland might not open until at least a year later.

Despite the delay, it looks like it’s full steam ahead for Marvel in California.
Again drawing inspiration from Hong Kong, where the Avengers facade acts as an anchor to the superhero focused Tomorrowland, a campus design is expected for California.

In a recent blog post laying out his knowledge on the project, Tom Bricker stated the campus might draw influences from Southern California’s “Googie, Space Age, or midcentury modern” design aesthetics. This same style has also been rumored for Walt Disney World’s Tomorrowland and can be seen in the box office hit The Incredibles 2. Recently, Disney unveiled an Incredible’s attraction in California Adventure, a reimagining of a coaster that opened with the park, that has a similar design style to Bricker is describing, influenced heavily by Palm Springs and other California locations.

A microbrewery and craft beer bar focused on California beers expected to help drive home the California theme of the superhero focused land. This would be the second microbrewery for the Disneyland resort after a Ballast Point brewery opens in Downtown Disney later this year. In the blog post, Bricker did state the land would only include two rides, but Hill and others seem to believe at least three rides will ultimately call the land home.

The third ride likely being an impressive new Spider-Man attraction that will make use of a newly filed patent by Disney of a ride system featuring swing-style pendulum-like ride vehicles. Essentially a more intense version of the Peter Pan-style ride system, but here the ride vehicles would be able to swing, creating a unique free-flying sensation.

Projection mapping would simulate height, making it seem like the riders were hanging off the edge of skyscrapers with the floor looking like an active street hundreds of feet below. Hill has stated multiple times now that public documents that have been shared with him show this Spider-Man pendulum-style dark ride being built where the "a bug’s land" is currently located, which is scheduled to close this September.

To ensure the ride opens as quickly as possible, Hill believes construction begin right away on the new Spider-Man ride.

Disney isn't waiting for the new rides to bring Marvel into the California park. Multiple meet-and-greets, including a highly-themed Black Panther one, already call the park home. These meet-and-greets may get updates with highly interactive queues, but in the end, they’ll be staying as part of the new campus. The poster announcing the new Marvel land in Anaheim has both the Black Panther and Dr. Strange on it. Disney CEO Bob Iger has confirmed a Black Panther attraction is in the works, but for now both of these characters are rumored to only be featured via meet-and-greets.

The Ant-Man family shooter ride and a groundbreaking Spider-Man attraction, along with an in-park microbrewery and the already opened Guardians of the Galaxy drop tower ride, will setup Disney California Adventure as decent competition against Star Wars next door.

Sadly, Orlando won’t be getting most of these new Marvel rides that are slated for Anaheim, Hong Kong, or Paris, but that doesn’t mean their updates won’t affect projects here.

Along with Marvel in California Adventure, Anaheim also seems to be looking at an update to their Tomorrowland, since both Star Tours and Buzz Lightyear Space Ranger Spin are expected to close. The updates to the Anaheim Tomorrowland won’t happen until the middle of next decade at the earliest. This places it a few years after the rumored timeline for Magic Kingdom’s Tomorrowland update, but Disney could save some money by using many of the same elements in both. The Magic Kingdom update is expected to draw inspiration from the park’s new TRON coaster that is currently under construction.

Some are speculating that Magic Kingdom’s Buzz Lightyear attraction and the Monsters, Inc. Laugh Floor show next door could both be not long for this world, but there’s no indication so far that Orlando would be getting the Ant-Man update Hong Kong is getting. At this time, the Magic Kingdom’s Tomorrowland update is focused on much more dire needs, such as replacing Stitch’s Great Escape.

Some of the same ride systems being used in Marvel attractions may also make their way to Orlando, especially the Spider-Man pendulum system, though an intellectual property for the ride system here still seems to be very much undecided.

As far as Marvel itself for Orlando, the only confirmed presence is the Guardians of the Galaxy attraction slated for Epcot. Guardians of the Galaxy is expected to open by 2021 with California’s second Marvel attraction opening around the same time. Many of the most popular Marvel intellectual properties are banned from Walt Disney World thanks to a 1990s era contract between Marvel and Universal Studios. Disney has been hard at work trying to find ways around the contract, but it’s clear many of the most valuable Marvel franchises won’t be seeing a presence at Walt Disney World anytime soon, if ever.