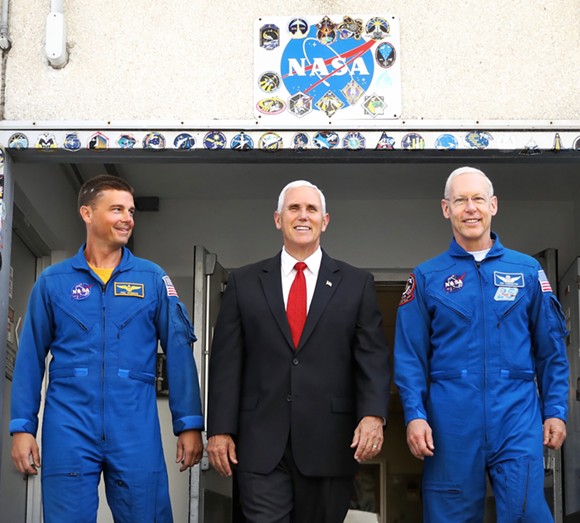 Vice President Mike Pence will visit NASA's Kennedy Space Center in Cape Canaveral next month to announce the first astronaut crews under NASA's Commercial Crew Program, according to sources familiar with the matter.

Pence, who chairs the National Space Council, will confirm a new launch date for the first private crew missions and announce which crew capsules each of the four selected astronauts will ride in to the International Space Station.

His visit is slated for Aug. 3 in the afternoon, right before the Parker Solar Probe launch, and President Trump – who originally planned to make the announcement – may accompany him.

NASA awarded SpaceX $2.6 billion and Boeing $4.2 billion in 2014 to each build crew capsules that can safely ferry U.S. astronauts to the International Space Station. SpaceX's Crew Dragon and Boeing's CST-100 Starliner are the two crew capsules in production, each going through multiple rounds of testing in an arduous certification process imposed by NASA.

Earlier this month, a federal watchdog report blasted NASA and the two aerospace contractors for precipitating costly delays to a debut crew launch. The report, drafted in April and released in July, cited missteps from NASA in ensuring the probability and cost of death in the event of an explosion during a crewed mission and warned that further production delays for the capsules could result in vacancies on the ISS.

"Without a viable contingency option for ensuring uninterrupted access to the ISS in the event of further commercial crew delays, we concluded that NASA was at risk of not being able to maximize the return on its multibillion dollar investment in the space station," the report read.

Pence's announcement will mark a milestone in the race to get U.S. astronauts lifting off from Cape Canaveral launchpads again.

"It's great to see all the progress that all the commercial crew companies are making for getting the vehicles flight-ready and getting our astronauts launching from U.S. soil," Phil Larson, a former space policy advisor to President Barack Obama, told Orlando Weekly in an interview.

"That's what we wanted to see and hope to see when we started the program in the early days of the Obama administration," Larson added. "It was to close the gap in human spaceflight that we were facing with the retirement of the space shuttle."

The space coast is starting to see tangible progress in the commercial crew program, too. SpaceX's Crew Dragon is slated for new rounds of testing in Florida. "Crew Dragon arrived in Florida this week ahead of its first flight after completing thermal vacuum and acoustic testing at NASA's Plum Brook Station in Ohio," a spokeswoman for SpaceX said in an email.

The visit from Pence – and possibly Trump – will fall just before the launch of NASA's new Parker Solar Probe, which is lifting off from Kennedy Space Center in the early hours of Aug. 4.