There's one big question left regarding 'Guardians of the Galaxy' at Epcot, and it's tearing apart the fan community

When it was announced, everyone knew that Guardians of the Galaxy would be a major addition to Epcot, but what we didn’t realize at the time was how massive the new Guardians ride building itself would be.

Nearly 1,000 concrete trucks were needed to pour the massive foundation of the 12-story show building that will house one of the world’s longest indoor roller coasters.

With the 133-foot-tall walls now mostly erected, the building is easily visible from multiple locations inside and outside Epcot, most notably from within the World Showcase. With such a visible structure, many are wondering how or if Disney plans to hide it.

Two main schools of thought have emerged, and it’s splitting the fan community. On one side we have the likes of Tom Corless, reporting that the Guardians show building simply won’t be themed. In a recent blog post titled “Disney Will Not Theme The Massive Show Building for the Guardians of the Galaxy Roller Coaster at Epcot,” Corless points to other Epcot buildings, like Soarin’, which are easily visible from the World Showcase and are not themed stating Epcot isn’t like other parks where intense levels of theming are required.

But with this building standing much taller and in a more visible location than any other Epcot structure, except for the park’s iconic Spaceship Earth, the lack of would be one of the most notable in any Disney park.

The idea of a giant warehouse-like box just chilling directly beside one of the most recognizable theme park structures ever conceived is too much for many to accept. This has caused others to say Disney plans to theme the massive building, with the leading theory being a modern design inspired by a land found in the Guardians of the Galaxy stories. First reported by Brayden Holness of Mickey Views as a possibility, the theory has since gained support from various Disney insiders, including French-based Disney historian Alain Littaye, of the Disney and More site, and Jack Kendall of DSNY Newscast.

Both Holness and Littaye point to a video featured in the current “Guardians of the Galaxy – Awesome Mix Live!” show that opened last month in the America Gardens Theatre at Epcot as a hint of what is to come over in Future World. Large video screens behind the stage show scenes from Xandar, a fictional sci-fi planet that plays a secondary role throughout the Guardians storylines.

One building, in particular, seems like an option for the design of the ride building. A large square-like building with a distinctive metallic look flies past the camera as text on the screen explains that this is "Xandar, Capital of the NOVA Empire." The image was featured in the 2014 official art book for the movie but the specific building in question seems to be one that was part of the earlier concept art designed by Olivier Pron but wasn't used in any major sense in the films. The use of the same building for the Epcot show seems a bit odd since so many other, more recognizable scenes from Xandar are available for use.

The look of Xandar isn’t that different than the look of the Tomorrowland featured in the 2015 film of the same name, or that of the actual Tomorrowland found in Shanghai Disneyland. The Shanghai Disneyland Tomorrowland draws heavily upon Epcot’s Future World aesthetic with large fountains, landscaped vistas, and modern buildings dotting an office park like setting. This same look is found again in the early concept artist renderings of the updated Future World that Disney shared at the D23 Expo in 2017. Those renderings showed a number of Xandar/Tomorrowland movie like buildings with some looking nearly identical to ones found in Shanghai Disneyland’s Tomorrowland but missing entirely from the concept art was the new Guardians ride building that is currently under construction. 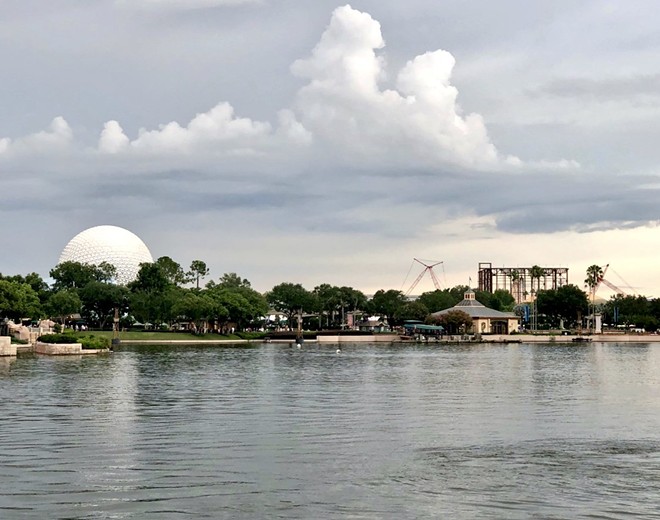 If the Xandar building is, in fact, the design for the new Guardians roller coaster in Future World the building would easily blend with other current and proposed Future World buildings, including Spaceship Earth. This is important since the large ride building is visible from multiple areas both inside and outside of the park.

Ironically, one of the few areas where the ride building isn’t visible is from the entrance area of the new attraction. Using the former Universe of Energy building for the queue, pre-show, and exit gift, the primary ride building will be hidden behind the now-closed Wonders of Life pavilion next door via a large swath of pine trees. This leaves the need to theme it to Guardians less critical, but with the Xandar aesthetic so closely resembling the existing Future World design the theme would fit in despite the lack of visibility from the ride entrance itself.

Of course, all of this becomes even more important as Disney supposedly plans a new entrance plaza hotel at Epcot which would likely include views of the new ride building from multiple areas of the hotel.

With major bloggers and vloggers now going head to head on what this ride building will look like it will only be a matter of time before more details begin to leak out. But, of course, all plans can change ahead of the ride’s expected opening sometime before the WDW 50th Anniversary in 2021.

The Gist Epcot Guardians of the Galaxy