Under a torrential downpour on Sunday, mourners tried to keep their candles lit – if only for a moment – to honor Sasha Garden, a 27-year-old transgender woman found dead last Thursday at the back of an Orlando apartment complex.

Orange County Sheriff's Office deputies found Garden's body in the back of the Reserve at Lake Buchanan Apartments on Holden Avenue around 5 a.m. on July 19. Investigators said her body had signs of trauma and described her death as a "homicide." No suspects have been identified so far.

Over the weekend, local LGBTQ advocates set up a small vigil in front of the apartment complex where Garden was found. After lighting candles, they prayed together and held up posters with Garden's photo. Later, some advocates passed around flyers with the Crimeline tip number to neighbors wandering outside, asking them to call if they knew anything about who murdered the woman.

Garden was originally from Milwaukee, Wisconsin, where the majority of her family lives, her cousin Yolanda Davis said.

Days after her murder, Davis remembered Garden for her love of hard candy and an open heart.

"Sasha was just Sasha," she said. "Her biggest thing was to provide for her family. She didn’t take shit. She was always a kind person. Everybody has their mean days – ain’t nobody perfect. But at the end of the day she was genuine. She didn’t sugarcoat it."

Garden liked to wear her hair long and appreciated the glittery things in life. Davis said her cousin was the only one allowed to touch her hair because Garden was such a talented stylist. Both friends and family have said Garden wanted to open up her own hair salon some day. She lived in Orlando because she liked the palm trees and the heat.

Davis says she never imagined that her cousin would never come back home. Garden's mother has set up a GoFundMe to pay for funeral expenses.

"My baby is gone," Davis said. "We’re still in disbelief. I want to know who was angry enough to beat my little cousin to death."

"In the early stages of this homicide investigation, the OCSO released details regarding the legal name of the victim as required by state statute, along with other details that might assist detectives in solving this heinous crime," Demings said in a statement. "At that time the Orange County Sheriff's Office did not know the individual was transgender and had only one goal in mind, finding and apprehending a suspect."

Demings said after OCSO public information officers were made aware by family and friends that Garden was a trans woman, they "immediately" began using the appropriate gender and recognized name.

"The Orange County Sheriff's Office did not intend to be insensitive in this effort and I along with agency members apologize for any misgivings our communications may have caused," Demings said. "As Sheriff, I am proud to report that the Orange County Sheriff's Office continues to have a positive relationship and open dialogue with members of the LGBTQ community, and we will seek additional measures to further strengthen that bond in the days ahead." 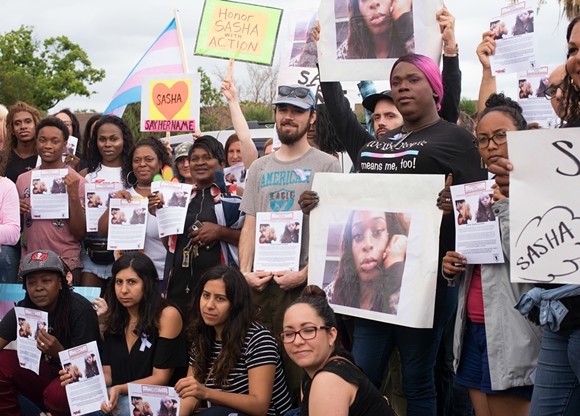 "Pardon my language, but I call [the apology] bullshit," Kelley said. "I call it absolute bullshit. Being trans in Orlando is not new. The Orange County Sheriff’s Department, the Orlando Police Department, they know about transgender people. For them to call her a 'man in a dress' on television and then correct it eight hours later, the damage is already done. Eight hours later, it's already too late. That gives people the opportunity to make fun and light of this, and that's why we're not taken seriously because of stuff like this. That narrative has to stop."

Kelley said many trans women in Orlando are worried because Garden is the fourth trans woman to be killed in Florida within the span of five months. The first three women were killed in Jacksonville. Garden was a sex worker, and many other sex workers in the area are fearful, she said.

"This is their livelihood," Kelley said. "I know what that burden is. I can't imagine what it's like to have to know your sister just got murdered in the back of a building and you have to come out here tonight to pay for your hotel room tomorrow, you know? It's ridiculous. It's scary."

Both Kelley and Ashley Figueroa, of BLISS Healthcare Services, called on the Sheriff's Office to take action.

"What they did was unacceptable to our community," Figueroa said. "They need to make this right. They need to listen to us as a community. What we need as a community is for them to be able to get transgender-competent training so when something like this happens, we don't have the same experience."

"We're people," she said. "We are someone's cousins, sisters, brothers, aunties, uncles. And who we are should not change that or change the way we're treated in situations like this."

OCSO is encouraging people with information about Garden's death to call Crimeline 800-423-TIPS (8477). The reward for information is up to $5,000.