A new map allows you to stop scanning your neighborhood for Trump yard signs, Truck Nutz or an overabundance of people who don't mind being lied to.

Released today by the New York Times, this new, extremely detailed interactive election map actually allows readers to see exactly how many Trump and Hillary supporters occupy any given neighborhood across the country, including Orlando.

Though maps breaking down the 2016 election have been around for, well, nearly two years, this particular map uses data from over 168,000 voting precincts, as opposed to just looking at counties.

The map was put together by Washington State University doctoral student Ryne Rohla, who compiled the data from government websites and election officials.

Unlike county election maps, this new data set gives us a bird's-eye view of a neighborhoods' political makeup, and the Orlando area has some pretty polarized political arenas.

One thing that's very apparent is how lopsided the voting patterns are in Orlando's more segregated neighborhoods. When you compare the New York Times map with a recent map from the Anti-Discrimination Center, which also uses data from 2016, the similarities are hard to ignore.

You can see this racial divide vividly in areas like Eatonville, which is a historically black neighborhood, and where unsurprisingly 93 percent of the residents voted for Hillary.

This contrast is also visible in the Pine Hills and Paramore areas, where voters also leaned heavily Democratic. 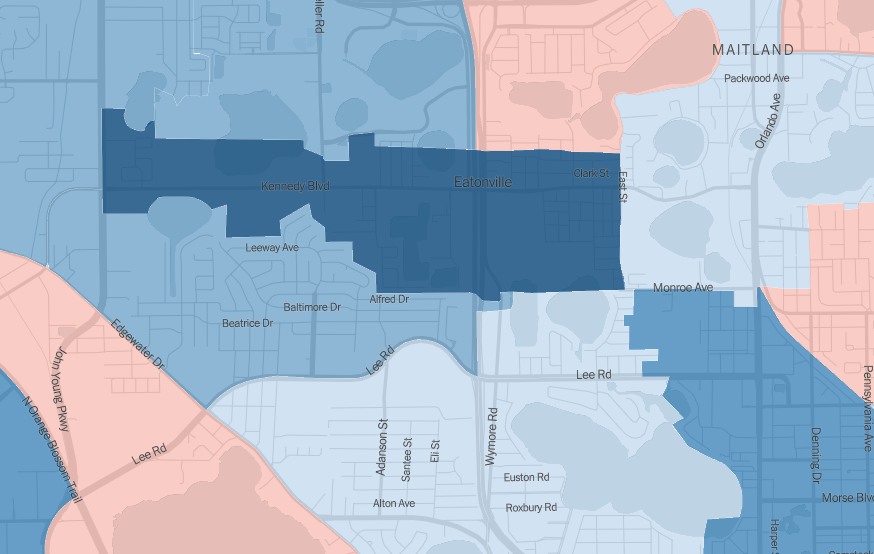 On the other side of the spectrum, places like Windermere, where nearly 70 percent of the residents are white, the voting scale went hard to the GOP.

As you can see with giant red blob below, 68 percent of the voters in this area voted for Trump. 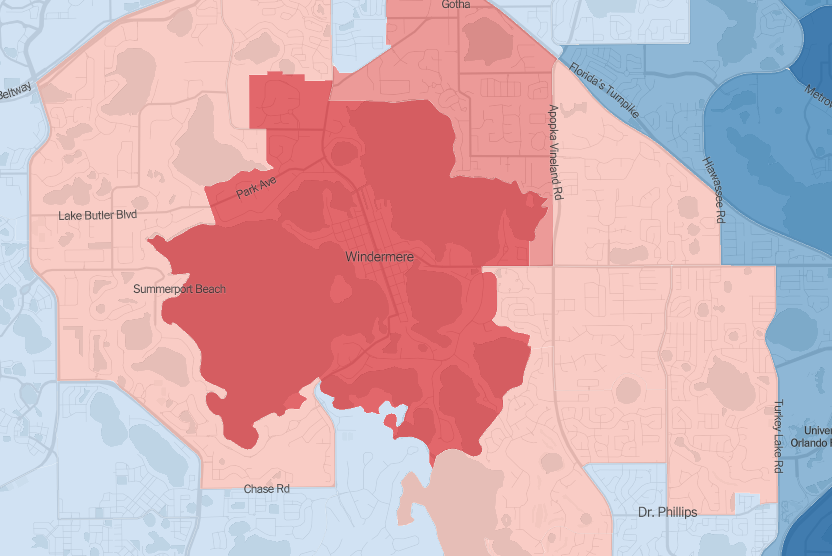 College Park is one of the more politically well-rounded neighborhoods, with the area between Silver Star, Orange Blossom Trail and Colonial going 60 percent to Trump, and the areas around Edgewater leaning 50 percent to Hillary and just 44 percent to Trump.

If you zoom out, the Orlando metro area is visible as a giant blue dot in a sea of red, which is common among most larger urban areas. You'll also notice that Disney went Trump.

Check out the whole map here.