THIS LITTLE UNDERGROUND
The Mentors and Awesome & the Ass Kickers, Will’s Pub, July 25

Before there were the Dwarves or even GG Allin, there were the Mentors. The name may only hold recognition and cachet in the deepest bowels of the shock-rock underground but, at one time, but the sleaze merchants raised alarm all the way up into the halls of Congress.

In terms of spectacle, a shitshow like this is a pretty hard prospect to resist, especially considering that the Mentors have a history of drawing protest. The actual performance, however, was a little tame, which equals sad when it comes to things predicated on wildness like this. But the very nature of the Mentors continues to fan the flame of conversation and, often, ire.

The only real defense for this kind of stuff is the sheer sake of art. Calling it outrageous is to prove its point. Calling it trash would only be a compliment. The only thing truly dangerous about it would be to take it too seriously. The Mentors’ late singer El Duce once appeared on the Jerry Springer Show alongside GWAR, for chrissakes.

But most perspectives on the Mentors will probably be refracted through generational outlooks. As a dyed-in-the-wool liberal, I’m unequivocally behind all the young progressive movements rising now (I’ve been waiting on these social changes longer than millennials have). But I’m also old enough to have seen the folly of trying to shut down art that you don’t agree with. Even as a kid, I remember Tipper Gore’s high-profile crusade in the ‘80s and its unintended consequences. The Mentors were themselves singled out as a prime case of the perverting influence of rock & roll on America’s youth at those 1985 Parents Music Resource Center congressional hearings. 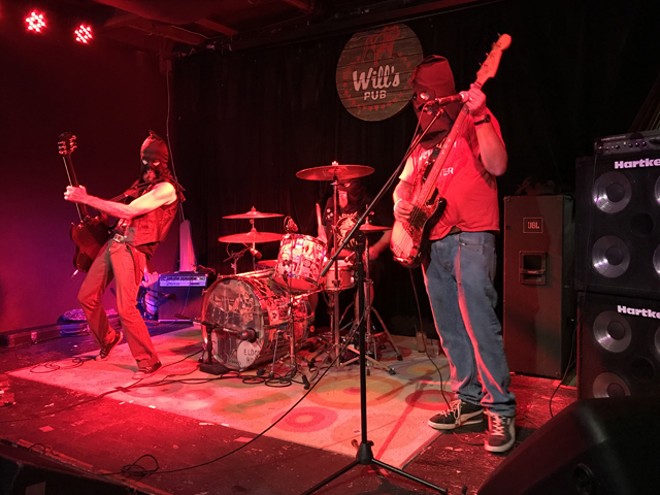 Regardless, what you want to make of the Mentors or anyone like them is up to you. No one’s saying you gotta laugh along – I didn’t. But giving too much heed to what is so obviously a troll act, especially in times that runneth over with real-life abominations of global consequence, is to be an unwitting Tipper.

More notable in terms of show was the return of another band built on ridiculousness. Daft punks Awesome and the Ass Kickers are a comedy band that emerged on the local circuit in the late 2000s with a pretty winning combination of stupid songs and luchador masks. But they haven’t been much of a live presence in years. Now they’ve reemerged, and underneath a couple of those sweet masks are new and notable members Dirt McCoy (Moonmen from Mars, Trailer Park Refugees) and Chris Cucci (The Heathens, owner of Post Records).

Luckily, the Ass Kickers are still beautifully dumb. But they’re actually more together as a band than before. And, of chief importance, their wardrobe game is still tight. Welcome back, amigos.