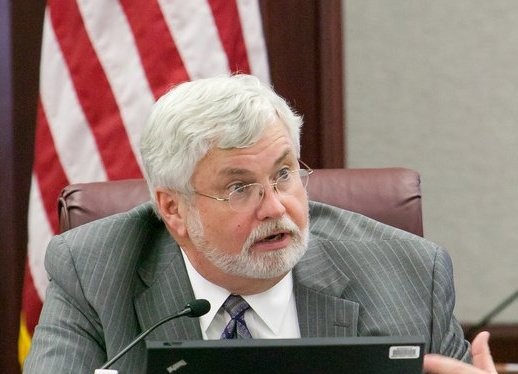 Jack Campbell, state attorney in the 2nd Judicial Circuit, said Thursday there was not enough “evidence to prove beyond a reasonable doubt that Mr. Latvala was unlawfully compensated or rewarded for his official behavior as a Florida senator.”

“Since criminal charges are not warranted, this office will take no further action on the matter,” Campbell wrote in a brief summation to the Florida Department of Law Enforcement, which reached the same conclusion after investigating a possible quid pro quo.

Thursday’s announcement closed months of investigations into Latvala, a veteran lawmaker who decided to resign from the Senate in December following the release of a report by Senate Special Master Ronald Swanson, a retired judge. The probe was sparked by allegations that Latvala, who was serving as the powerful Senate budget chief, had sexually harassed Rachel Perrin Rogers, a Senate aide.

Latvala has steadfastly denied any wrongdoing but admitted he had an extramarital affair with former lobbyist Laura McLeod, whose testimony prompted Swanson to recommend a criminal probe into whether Latvala had broken state laws by promising legislative favors in exchange for sex.

“Basically, what we’ve had here with FDLE and the state attorney is we’ve had professional law enforcement people who aren’t tainted by Senate politics, who have looked at something and made a good judgment on it. They’ve done their job and I commend them for doing their job,” Latvala told The News Service of Florida on Thursday. “It took a little longer for FDLE to get that report done than I would have liked, but I think they saw through a lot of this stuff.”

The state law enforcement agency launched its investigation sometime in December, according to a report released by Campbell’s office Thursday.

In a brief statement, Senate President Joe Negron, R-Stuart, thanked the FDLE and Campbell for “their fair, thorough, and independent investigation.”

Swanson found probable cause to support allegations that Latvala had repeatedly groped Perrin Rogers and engaged in a pattern of making unwelcome remarks about women's bodies. Perrin Rogers set off the inquiry into Latvala, who denied her allegations, by filing a complaint with the Senate Rules Committee.

The FDLE report was focused on the testimony of McLeod, who quit lobbying and went to work as an aide to Sen. Lauren Book, D-Plantation, in September. McLeod stepped down in April.

But, she said "it seemed that it was expected" and that sex "will be part of the equation."

McLeod said Latvala behaved as though it was something "he felt entitled to."

"I tolerated it because it was part of my job," McLeod said.

In a summary, FDLE Inspector Keith B. Riddick noted investigators “did not find independent evidence that corroborated or contradicted any information” made by McLeod or Latvala.

“Furthermore, the investigation did not develop an indication that Senator Latvala exerted his influence as Florida Senator to assist Ms. McLeod in any issue she presented as a lobbyist in exchange for a continuing sexual relationship,” the June 22 report noted.

The reports included previously unreleased graphic depictions of encounters between McLeod and Latvala in his Senate office, encounters that she described as unwanted.

McLeod and Latvala began a relationship in the late 1990s, before Latvala left the Legislature because of term limits. After he later returned to the Senate, they resumed the relationship in 2015 at his insistence, according to McLeod, who described the senator to investigators as “a ‘big personality,’ powerful, persistent and she had issues that had to go in front of his committee,” according to the report.

“McLeod labeled it as ‘a very crummy position to be in,’ ” the FDLE investigative report said.

But, contradicting McLeod, Latvala told investigators in April that he and the former lobbyist had a “very casual relationship” that was consensual and that had gone on for two decades.

“The bottom line is their assessment was there was no evidence of any quid pro quo,” Latvala said Thursday.

“They knew the outcome. They violated their own rules in the Senate. We have rules. One of the rules is you’re supposed to tell the senator what the allegations are against him,” Latvala said. “I never had the opportunity in the Senate process to respond to Laura McLeod’s charges. They never mentioned it to me.”

In December, Swanson found that McLeod’s testimony and text-message exchanges between the senator and the former lobbyist indicated that Latvala may have violated ethics rules as well as “laws prohibiting public corruption” by agreeing to support the lobbyist's legislative priorities if she would have sex with him or “allowed him to touch her body in a sexual manner.”

Swanson recommended that the allegations of the quid pro quo “be immediately referred to law enforcement for further investigation.”

The Senate referred Swanson’s report to the Tallahassee Police Department, which then passed it to the Florida Department of Law Enforcement.

Former Rep. Ed Hooper of Clearwater and Ilir Karruli of Palm Harbor are running for the Republican nomination to replace Latvala. The winner will face former Democratic state Rep. Amanda Murphy of New Port Richey in the November general election.