The price rise was proposed by Delaware North, the management company that oversees the Visitors Center, and was approved by NASA, who owns the complex.

Since 2012 the visitors center, which receives no federal or state tax funding, has added more than $136 million in new exhibits, including the award-winning Space Shuttle Atlantis Exhibit and a new U.S. Astronaut Hall of Fame.

The Space Shuttle Atlantis Exhibit ushered in a new era for the Brevard County complex. The centerpiece of the exhibit is the space-worn shuttle, displayed with its cargo doors open and the robotic arm stretching out toward visitors. This is the only shuttle on display that offers these unique views and is widely viewed as the best of the four shuttle displays in the world. It’s actually not uncommon to see guests cry as the shuttle comes into focus.

While Atlantis is the centerpiece of the exhibit, there are more than 60 other displays in the 90,000-square-foot $100 million .

Across the park from Atlantis is another massive new addition: the Falcon’s Creative Group-designed "Heroes & Legends" attraction, featuring the U.S. Astronaut Hall of Fame, which opened in 2016.

Orlando-based Falcon’s worked directly with astronauts to help realize a museum-like attraction that accurately reflects the realities of space travel. Cutting-edge technology was used to tell the stories of America’s relationship with space, stretching from comic books to those who walked on the moon. A custom-built 28-foot tall, 225-degree wraparound theater welcomes visitors to the Hall of Fame with a custom-made 6K 3D film.

Multiple interactive exhibits give guests access to more than 120 interviews ranging from family members of astronauts lost in the line of duty to George Takei.

Technically, only the last section of the more than 37,000-square-foot is the Hall of Fame, where close to 100 heroes are listed for their contributions to America’s space race. 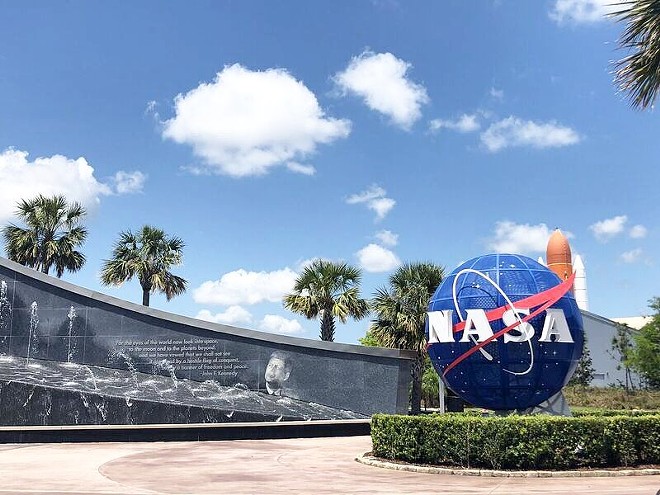 A $16 million new entrance plaza that debuted in 2013 includes the first-ever 3D representation of the NASA insignia. A wall with a quote and image of John F. Kennedy flank a fountain near the NASA "meatball." Twenty-six water jets equipped with LED lights make the 5,000-gallon fountain come alive and short fountain shows take place as guests leave the park in the evenings. 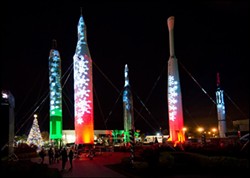 Other recent additions include a remodel of the world’s largest space gift shop and multiple seasonal offerings, including the popular Holidays in Space in late December.

According to a press release by Delaware North, the price increase will also pay for more field trips for Title I school groups at no cost for the schools. An increase in support personnel is also planned.

While millions have been spent on updates in recent years, Delaware North has no plan to stop. Their operating contract, which began in 1995, was recently extended until 2028. In the press release announcing the updated ticket prices, it was confirmed more updates are in the works. “Kennedy Space Center Visitor Complex will also be introducing a series of improvements and enhancements to already robust offerings including a renovated space for Lunch With An Astronaut, a new park entrance, updated facades for an overall new look and an out-of-this-world announcement, coming very soon,” said the release.

A master plan in 2010, which included most of the recent updates, also featured a number of other additions that have yet to be confirmed since the 2010 proposal. One of the more notable additions listed in the 2010 plan is a new 363-foot tall (the height of a Saturn V rocket) observation tower that would have a dining experience within it and what looks to be a glass floor walkway. Other additions include a nature trail and nighttime show in a new amphitheater that can also be used for rocket launch viewings. Currently, there are some smaller projects in the works including a secondary entrance road allowing for greater access to the Visitor’s Center and the restoration of a Saturn IB rocket that sat on its side for many years in the Rocket Garden. According to Space.com, it is the last remaining flight-configured rocket of the same category that launched the first Apollo astronauts. Guests can view the restoration via custom-built walls that have large windows and informational panels along them.

According to artwork used in the 2010 proposal, other new additions may include a flying theater, similar to Epcot’s Soarin’, and interactive water-based exhibits focused on how rockets are launched. Nearby SpaceX is proposing its own Visitor’s Center that may be included in some tours of Kennedy Space Center, though specifics on how the relationship between the two visitor’s centers has yet to be announced.

Information on the updated ticket prices can be found on the Kennedy Space Center Visitor’s Complex website.